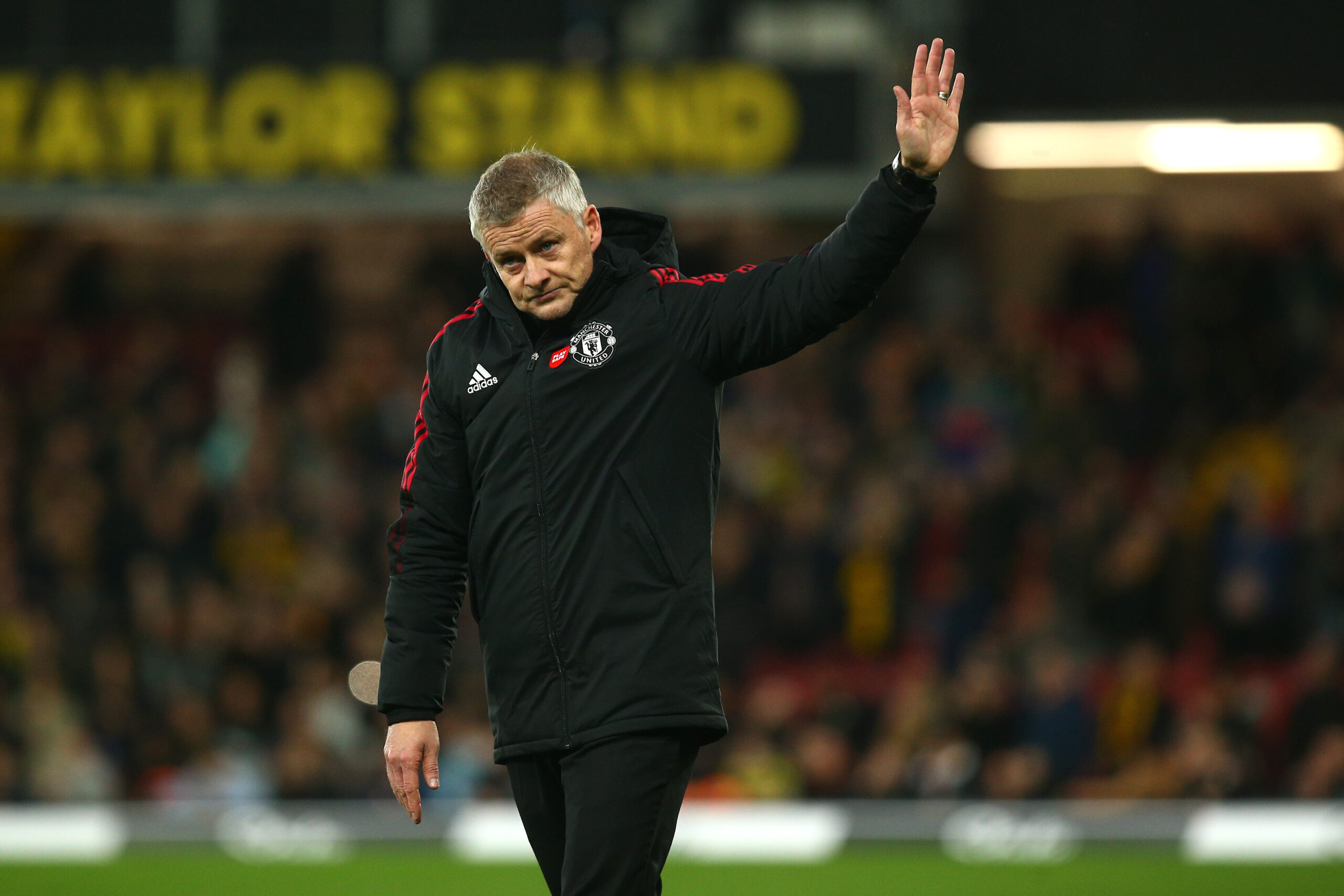 After almost three years at the helm, Ole Gunnar Solskjaer has been sacked as Manchester United manager.

It was a sad ending. As a club legend, there is no one that the fans would have wanted to succeed more.

However, three years of ups and downs led to this point.

Here are ten vital games from Solskjaer’s reign in charge at the Red Devils.

Jose Mourinho’s time in charge of Man Utd came to an end after a 3-1 defeat at Anfield. The Portuguese had become unpopular at the club, with the results not backing up the tedious brand of football.

In came Solskjaer as interim boss. His first task was to defeat a relegation-threatened Cardiff City side, and it was one that he did with ease.

The Red Devils raced into a two-goal lead thanks to long-range strikes by Marcus Rashford and Ander Herrera.

Victor Camarasa pulled one back for the Welsh side from the penalty spot, but the visitors made amends with a fantastic team goal finished off by Anthony Martial.

They continued to perform in the second half, with Jesse Lingard bagging himself a brace. Rashford and Paul Pogba also came close to adding to the scoreline.

Mourinho’s uninspiring style felt long gone, and Man Utd looked like a completely different team with the shackles off.

Solskjaer’s temporary period in charge had been going brilliantly, winning 13 and losing just one of his opening 16 matches.

Unfortunately, that defeat came in the home leg of their Champions League round of 16 tie against Paris Saint-Germain.

They travelled to Paris for the second leg, needing to win by two goals to stand a chance of progressing. With several key players absent, it seemed impossible.

An early mistake by Thilo Kehrer allowed Romelu Lukaku through to open the scoring in the second minute, but they were soon pegged back by Juan Bernat’s tap-in.

On the half-hour mark, Lukaku was once again the beneficiary of an error in the PSG backline.

Gianluigi Buffon made a mess of a shot by Rashford, and the Belgian was on hand to convert the rebound. One more goal would see Man Utd take the lead in the tie.

Throughout the second half, PSG pressed for another goal to secure their place in the next round.

Angel Di Maria had a strike ruled out, Kylian Mbappe lost his balance while through on goal, and Bernat hit the post. The visitors were looking down and out.

But as the final whistle approached, they got themselves a lifeline out of nowhere. Diogo Dalot’s shot was deflected wide by the arm of Presnel Kimpembe, and the referee awarded a penalty after a VAR check.

The pressure was immense, but Rashford kept his cool, slamming the ball into the back of the net. Deep into injury time, and Man Utd were heading for the quarter-finals.

They held out for the victory. Solskjaer had performed a miracle. For many, this was the game that convinced them that the Norwegian deserved the job permanently.

Almost a year on from being given the job full-time, things haven’t gone to plan. Solskjaer failed to push on from his early success, and his men find themselves heading for the Europa League places once again.

The lowest point came in a home game against Burnley. Having just lost against runaway leaders Liverpool, Man Utd needed a result to bounce back.

It was an awful performance from the Red Devils. Chris Wood put the Clarets in front shortly before half-time from a set-piece, and Jay Rodriguez grabbed the second with a blinding strike.

The result caused Man Utd to fall to seventh place. The pressure on Solskjaer was building.

The Burnley game appeared to give Man Utd the shot in the arm that they needed. They didn’t lose another game for the remainder of the league season – largely thanks to the immediate impact of January signing Bruno Fernandes.

Their final fixture before the COVID-19 pandemic could hardly have been any bigger. They faced bitter rivals Manchester City in a game that would be a real test for them.

It was a tightly fought contest, but the home team came out on top. Fernandes kicked things off with a bit of magic, picking out Martial with a quickly-taken free-kick. The Frenchman volleyed in at the near post through the arms of Ederson.

And in the closing moments, Old Trafford erupted as they snatched a second to seal it. Ederson again made a mess of things, allowing Scott McTominay to double their advantage from distance.

It’s the final game of the 2019/20 season. A 13-game unbeaten run has put Man Utd in third place going into the finale.

But opponents Leicester City are just behind them. The 20-time champions need to avoid defeat to secure themselves a Champions League spot.

It was cagey for most of the game, with few chances either way. Rashford had a couple of opportunities in the first half, and Jamie Vardy’s looping header struck the bar.

But the deadlock was broken in the 71st minute, and it was Man Utd who got the goal. Fernandes converted from the penalty spot after Martial had been brought down in the box. This left the Foxes needing two goals.

Things got worse for Brendan Rodgers’ men in injury time. Jonny Evans was sent off against his former club, and an error by Kasper Schmeichel allowed Lingard to grab a second.

Perhaps they would have been better off letting Leicester have that Champions League place.

Man Utd were drawn into a tough group in Europe, facing PSG, RB Leipzig, and Istanbul Basaksehir. They got off to a flyer, winning at the Parc des Princes 2-1 and thumping the German side 5-0 at home.

However, they were unable to maintain this level of performance. They suffered a shock loss in Turkey and were defeated in the reverse fixture against PSG.

This left them vulnerable going into the final group stage game against RB Leipzig, knowing that another loss would see them drop into the Europa League.

And things couldn’t have started any worse. Just two minutes in, Man City loanee Angelino drilled into the bottom corner after being picked out by Marcel Sabitzer.

The Spaniard continued to cause problems and played a massive part in the second goal. His cross found Amadou Haidara unmarked at the back post, and he volleyed in for 2-0.

Midway through the second half, Die Roten Bullen appeared to have wrapped up the three points. Angelino was again instrumental as his cross found its way to Justin Kluivert, who netted after a mix-up between David de Gea and Harry Maguire.

But that was far from the end of the drama. Fernandes got one back after Mason Greenwood was fouled in the box, and an own goal by Ibrahima Konate ensured a nervy final ten minutes.

But it was simply too little too late for Man Utd. They pushed for the equaliser, but Julian Nagelsmann’s side held out to book their place in the knockouts.

Man Utd had a rough start to the 2020/21 season, picking up just seven points from their first six. They found themselves in 15th place, having lost against Crystal Palace, Tottenham Hotspur, and Arsenal at home.

However, they managed to turn this around in fine fashion, winning ten and drawing three of their next 13. This propelled them to the top of the league in January. They seemed like genuine title contenders.

But it all unravelled with a home defeat to Sheffield United. The Blades were having a horrible season, sitting bottom of the table with just five points from their opening 19 games.

The Yorkshire club took a shock lead in the 23rd minute when John Fleck’s corner was flicked in off the post by Kean Bryan.

Their advantage lasted until the 64th minute when Alex Telles’ corner was met by the head of Maguire, who finished against his former club.

Many expected the hosts to take control from here, but this wasn’t the case. Some shambolic defending allowed Ollie Burke to put Sheffield United back in front as he saw his shot deflect in off Axel Tuanzebe. That ended up being the winner.

This was the result that derailed Man Utd’s title charge. They won just two of the next seven, allowing Man City to take control and storm into an unassailable lead.

Two-and-a-half years into Solskjaer’s reign, and he had his biggest opportunity to get a trophy in the cabinet. He had lost in four semi-finals previously but reached the final of the Europa League after comfortably sweeping Roma aside.

Standing in their way was Unai Emery’s Villarreal, who had just finished seventh in La Liga. It was a game that the Premier League side were heavily fancied to win.

But against the odds, the Yellow Submarine got the opening goal. Dani Parejo’s free-kick found Gerard Moreno at the back post, and he finished for his 30th goal of the season.

Edinson Cavani bundled in a scrappy one after the break, levelling the scores. That was the final goal of the game, and it was settled by a penalty shootout.

Neither side missed any of their first ten, ensuring that it went all the way down to the goalkeepers. Geronimo Rulli tucked his away brilliantly, but De Gea’s was kept out by the Argentine, clinching the trophy for Villarreal.

It was a game decided by fine margins. Had Villarreal missed just one of their first ten penalties, Solskjaer would have had a winners’ medal around his neck. But ultimately, it was a huge missed opportunity.

The start of the 2021/22 season had been mostly positive, having picked up seven points from their first three outings. And they had the chance to jump up to first place when they faced Newcastle United at Old Trafford.

But that wasn’t the big story of the day. It was the day that Cristiano Ronaldo made his sensational return to Man Utd.

The hype was as big as ever. ‘Ronaldo 7’ shirts sold in record numbers. Everyone was eager to get a glimpse of the Portuguese legend.

And the day went exactly as Man Utd fans would have hoped. They won 4-1, with Ronaldo grabbing himself two goals. Fernandes and Lingard also added to the scoreline with lovely finishes.

While it was a great result, this game massively ramped up the pressure on Solskjaer. Now there were no excuses.

He had quality in his side. He had to compete with Man City, Liverpool and Chelsea – anything less would be utter failure.

The Red Devils were unable to push on from the hype of Ronaldo’s return and hit a bad patch. They narrowly defeated West Ham United in the league but were eliminated in the Carabao Cup by the Hammers.

In addition, they suffered losses to Young Boys, Aston Villa and Leicester, and were unconvincing in victories against Villarreal and Atalanta.

The level of performance wasn’t high, and there were concerns when they faced one of the top sides. When Liverpool came to Old Trafford, everyone knew that they would have to raise their game to avoid a thumping.

It didn’t take long for the cracks to show. The Reds sliced open Man Utd’s backline with ease in the fifth minute, allowing Naby Keita to convert for 1-0. Not long afterwards, Diogo Jota doubled their lead with a tap-in from Trent Alexander-Arnold’s low cross.

And they were far from finished there. Of course, Mohamed Salah would get in on the act, adding three more to his personal tally with a magnificent hat-trick.

The deficit didn’t worsen after that, but there was still time for Pogba to get sent off for a challenge on Keita. Pretty much everything went wrong for Man Utd that day.

For many, this was the point of no return. More than ever, they were now convinced that Solskjaer was out of his depth. He took charge of four more games before being sacked.