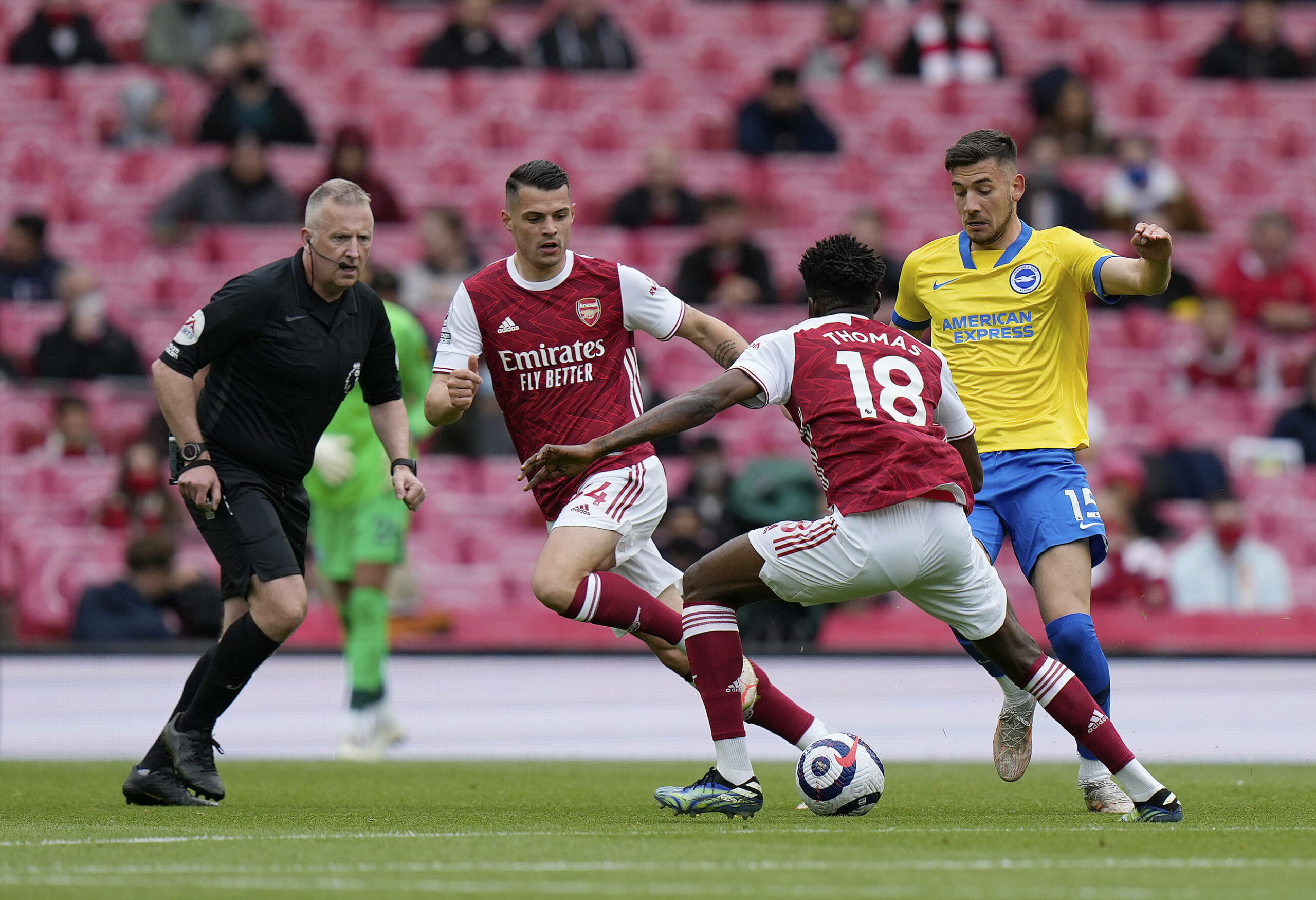 Despite an encouraging end to the 2020/21 Premier League season, Arsenal were left pondering what might have been if they were able to replicate their form from the second half of the campaign into the first.

A scenario that the Gunner’s faithful have been all to familiar with in previous years and has left them understandably frustrated, as they prepare to enter a fifth season without Champions League football.

Fingers have frequently been pointed towards the Arsenal midfield, and the club’s inability to find a partner suitable for last year’s £45 million summer arrival – Thomas Partey.

With Granit Xhaka looking increasingly likely to seek a move away from the Emirates this summer, and Lucas Torreira and Matteo Guendouzi set to follow suit following underwhelming loan spells, the heart of Arsenal’s midfield needs addressing.

Proven Quality takes a look at five candidates who pose as serious solutions to the Gunner’s midfield conundrum.

Yves Bissouma has established himself as one of Brighton’s star players in recent years, and has attracted interest from a host of Premier League clubs rivalling Arsenal for the 24-year-old’s signature.

The Mali international is a commanding figure in the heart of the Seagulls midfield, with his versatility allowing him to venture further forward instigating attacks, as well as effectively breaking down play in the middle of the park.

Bissouma finished the Premier League campaign second for most tackles successfully completed, with his 104 only four short of Leeds’ Luke Ayling’s 108.

Crucially, the former Lille player started 35 of Brighton’s 38 league games this season and his level of consistency is something Arsenal are crying out for.

Injuries to crucial players is something the Gunner’s struggle to recover from with alternatives failing to meet the standards required to compete with the ‘big six’, and a player of Bissouma’s durability would provide a real sturdiness to Mikel Arteta’s side.

With an average of 46.81 passes per match over the course of the Premier League season, it is clear Bissouma is always demanding the ball and eager to make things happen.

When he is not in possession, he is directly involved in gaining it back.

For a player who turns 25 in August, Bissouma’s best years lie ahead of him and with a partner of Partey’s calibre – the two would make for a resilient midfield Arsenal have long been searching for.

With Liverpool and Leicester among the teams keeping a firm eye on the Brighton man, Arsenal must act fast to avoid a repeat of their failed attempt to land Emi Buendia.

Ruben Neves has become a firm fan favourite at the Molineux since his arrival from Porto in 2017.

The Portuguese international has made 176 appearances for Wolves, and despite what many will see as something of a down year this season, it is only due to the impressive standards the 24-year-old has set himself during his career so far.

During his three full seasons in the Premier League, Neves has registered 11 goals and six assists from midfield.

As well as the Wolves man proven goal contribution in England’s top flight, it is the midfielder’s influence on the pitch that has led to his many admirers from the league’s top clubs.

Neves has registered 20 through balls over his three premier league seasons in addition to creating 10 goal scoring opportunities.

With Nicolas Pepe and Alexandre Lacazette rediscovering their form towards the end of last season, and club captain Pierre-Emerick Aubameyang no doubt eager to return to his clinical best during the 2021/22 campaign, Neves could form a formidable partnership with Arsenal’s current front three.

For a player who has consistently shown he is capable of spectacular moments, as the likes of Arsenal and Manchester United have fallen victim to, Neves’ signature would show a statement of intent and add a real flair to the Gunner’s XI.

Nabil Fekir needs no introduction to the Arsenal supporters, with the Real Betis playmaker routinely linked with a move to north London prior to his decision to head to Spain in 2019.

Many were surprised at the 27-year-old’s decision to leave Champions League playing Lyon for Betis, when the likes of Arsenal, Liverpool, Real Madrid and Barcelona were closely eying his availability.

Fekir began his La Liga career in style, scoring a spectacular goal against Barcelona at the Camp Nou before netting again in his second league appearance against Leganes.

The remainder of the Frenchman’s debut season failed to live up to expectations, however the maverick Betis signing has shown signs of his old self during the 2020/21 campaign.

With five league goals and five assists, the attacking midfielder has utilised his inventive style of play through trickery and elusiveness.

Throughout his time at Lyon and Betis he has underlined his ability to produce defence splitting passes as well as rely on his silky skills to effortlessly beat the opposition.

Arsenal finishing the season in 8th for a second season in a row could largely be put down to a range of uninspired performances throughout the season, with a lack of creativity in the final third.

A shortage of goals scored arose from players inability to find that killer pass, something Fekir has shown throughout his time in Ligue 1 and La Liga that he is routinely able to produce.

Partey and Fekir are no doubt two different players, with the latter an offensively minded midfielder. However, there can be no question that the two would combine effectively, complementing each other’s styles of play.

With Partey happy to sit deep when required, this would free up room for Fekir to venture forward, instigating attacks and increasing the fluidity of Arsenal’s play that the Red Army have been missing in previous years.

The Gunners have reportedly submitted a bid for Anderlecht midfielder Albert Sambi Lokonga, who has become a key member of Vincent Kompany’s side.

The 21-year-old has made over 50 first-team appearances in the Jupiler Pro League over the past two seasons, earning his first senior call-up to the Belgian national side in March.

Manager Roberto Martinez included Lokonga in his Euro 2020 standby list and has stated he is one of the country’s players to watch over the next two years.

Lokonga can play at the base of midfield or in a more advanced role, and his versatility is something previous holding midfielders have lacked in Arsenal’s side.

As an expansive passer and a dynamic dribbler, the Anderlecht playmaker would be able to shift between a deeper role to a more box-to-box operator.

As the youngest of all five candidates, Lokonga mirrors Arsenal’s recruitment focus – young players with the potential to improve and generate increased sell-on value.

It couldn’t happen, could it?

It has been a difficult two seasons for Aaron Ramsey since he switched London for Turin to join Serie A giants Juventus in 2019.

Injuries and changes in manager have made it difficult for the Wales international to settle at Juve, and the 30-year-old has faced heavy criticism from the Italian media and the Old Lady faithful.

Ramsey has stated that he wants to play somewhere where he can ‘feel good again’, and what better place than the team he spent over ten years at, making 262 appearances in the process.

A large section of the Gunner’s fans were left puzzled at how easily Ramsey was allowed to depart from the Emirates, questioning Unai Emery’s decision to let him leave the club after marginalising him out of the Gunner’s side in his final season.

The former Cardiff midfielder is remembered fondly by the Arsenal supporters after scoring the winning goal in the FA Cup final in 2014 to end the club’s nine-year trophy drought.

Ramsey came up trumps in big games for the Gunners throughout his stay at the Emirates, and towards the end of his career in north London, was one of the few players in the team who possessed clear leadership qualities.

However, a return to his former-club would not be a move based on romance, rather the genuine quality he would be able to re-install into Arsenal’s midfield.

Ramsey has added a Serie A title and a Coppa Italia to his accolades since his time in Turin and would provide an assured presence alongside Partey in the middle of the park.

With his ability to pick a key pass, and chip in with a goal with smart movement, the Gunner’s exploring a fairy tale return for Ramsey could well be a viable option to bolster their midfield.

Highlight us on NewsNow!