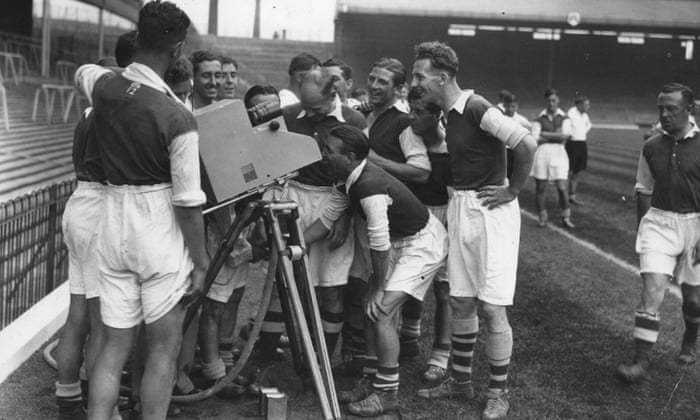 The BBC’s television service had only begun in 1936 and, to test their latest technology, a specially staged friendly between Arsenal and Arsenal Reserves was organised at the Highbury Stadium.

The BBC’s choice of testing their state-of-the-art technology on Arsenal was not down to the Gunners’ superior footballing acumen but a simple matter of the club’s geographical location and convenience.

The closest ground to the BBC’s Alexandra Palace headquarters was Arsenal’s Highbury Stadium.

Highbury was also the venue for the BBC’s first-ever radio match commentary ten years prior, a 1-1 draw between the Gunners and Sheffield United.

“The television demonstrations will show tactics on the field, shooting in goal, dribbling and goalkeeping,” read a preview of the match in the Manchester Guardian.

“Three cameras will be used, one being on the stands to give a comprehensive view of the ground, and two others near the goalmouth to give close-ups of the play and players and visual interviews.

“No film will be used, transmission being by radio direct to Alexandra Palace, which can actually be seen from the ground.”

Sandwiched between ‘British Movietone News’ and a cartoon, the BCC broadcasted the first 15 minutes of a match that would make history.

Three state-of-the-art cameras caught the football live and relayed it back to Alexandra Palace, from where it was broadcasted back to people in the area. Two cameras remained near the goals while one was perched up in the stands.

Unfortunately, though, rains and dark clouds made things a tad bit difficult for the few north London viewers who caught the action on their television sets.

According to match reports, the BBC’s picture became duller as the 15 minutes progressed. Despite the poor picture quality, the BBC’s test was a grand success.

“Even at 6.00 pm, when the light was falling, one could see clearly the farthest touchline and spectators in the far corner,” wrote Douglas Walters, a journalist watching the broadcast at a television theatre.

“Not once did I lose sight of the ball. The players were distinct.”

The final result of the game remains unknown to this day. Some have speculated that the two teams abandoned the game shortly after as the whole point of the tie was to test equipment for a live broadcast.

The 15-minute broadcast was a watershed moment in not just English football but also in British broadcast history.

“The football demonstrations from the Arsenal ground showed that eve on the small screen television can give something worth seeing from a game covering so great an amount of ground,” wrote The Observer in its match report.

After the initial test, the BBC ran a second broadcast the day after. Following those initial successes, the company broadcast an international match between England and Scotland in April 1938, as well as the final for the FA Cup later the same month.

After the trial’s success, the BBC did not waste any time and ran a second broadcast the very next day.

In 1938, the BCC broadcasted England’s 1-0 loss against Scotland at the Wembley Stadium on April 9, which became the first-ever international match to be shown live on television.

Later that same month, the BBC televised the FA Cup final between Preston North End and Huddersfield Town. An extra-time strike from Scotsman George Mutch won it for Preston.

As for Arsenal, the Gunners won the First Division at the end of the 1937/38 season, clinching the title by finishing just one point above Wolverhampton Wanderers.

Arsenal have seen many ‘firsts’ in football. For example, they were part of the first-ever Match of the Day broadcast in 1964 when BBC Two aired the highlights of Liverpool vs Arsenal at Anfield.

The Gunners were also part of football’s first-ever ‘interactive match’. In 1999, Sky Sports introduced the interactive feature in a tie between Arsenal and Manchester United.

People sitting at home could view the match from different camera angles, access statistics etc, at the push of a button.

In 2010, Arsenal and United made history again when a Premier League clash between the two sides became the first broadcast in 3D.