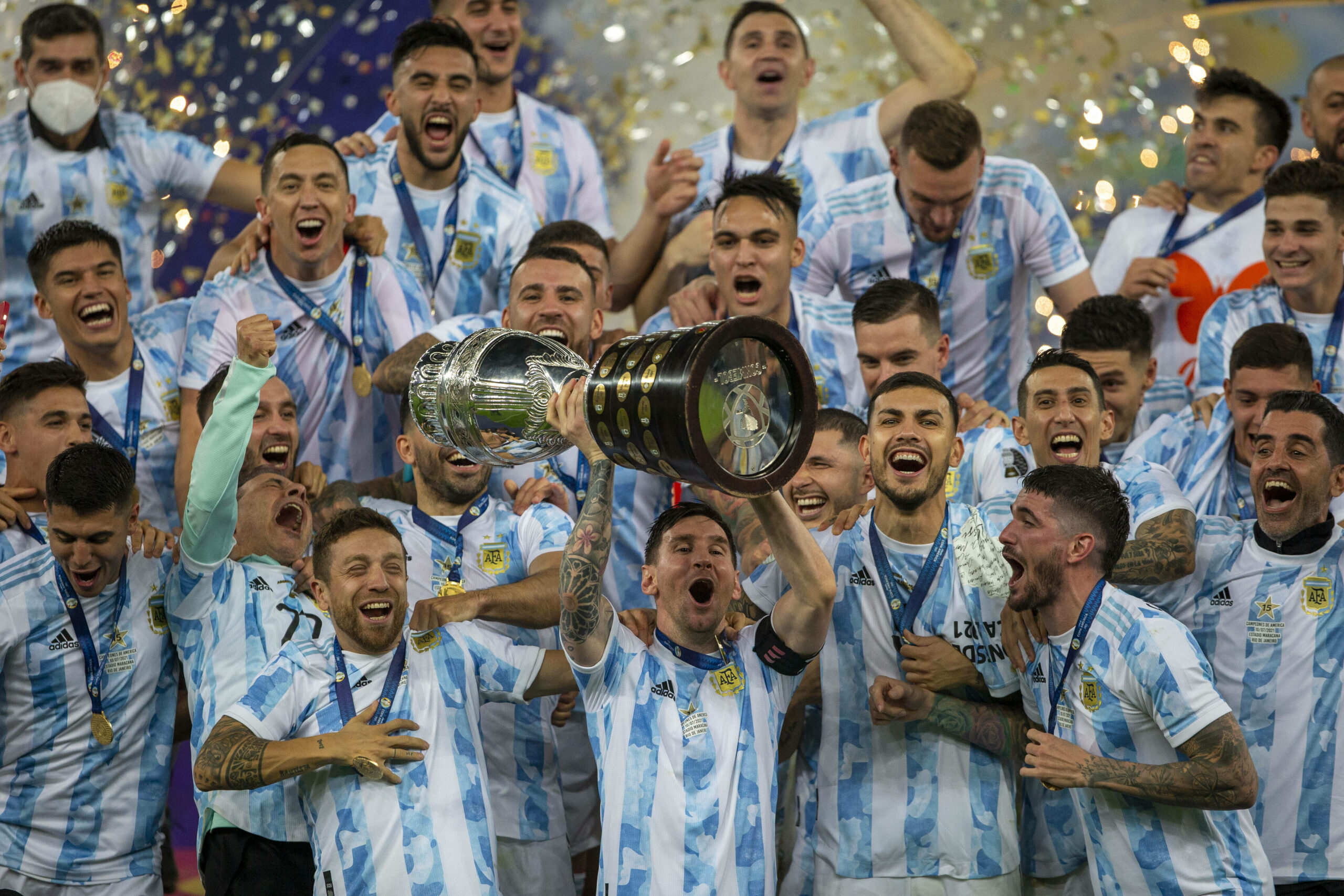 Argentina lifted the Copa America for the first time in 28 years as Angel di Maria’s first half goal was enough to seal victory over fierce rivals Brazil in Rio.

It was a landmark night for Lionel Messi as the Argentina captain claimed his first top-level honours with his country at his 10th major tournament.

The two sides walked out to a smattering of cheers and fireworks as the estimated 7,000 fans inside the Maracana stadium made their voices heard.

It was a tentative start to the Copa America 2021 final as the historic rivals showed a surprising amount of respect to each other in the opening stages.

However, Di Maria opened the scoring in superb fashion 22 minutes into the contest.

Rodrigo de Paul’s lofted ball forward from inside his own half was not dealt with by the Brazilian defence, and Di Maria’s deft first touch allowed him to delicately lob the ball over the onrushing Ederson.

Brazil struggled to assert themselves in the opening 45 minutes, despite the home advantage, however Roberto Firmino’s introduction prior to the second half added some impetus to the blue and yellow’s attack.

Richarlison thought he had levelled the scoring on minute 53 as he poked home from inside the area, but the goal was immediately chalked off with the Everton man in a clear offside position.

The 24-year-old then forced Emiliano Martinez into a smart save shortly after with an angled shot from inside Argentina’s penalty area.

Despite the added pressure, Argentina did not look rattled as Brazil failed to make the most of their growing possession in the game.

Tite’s side had a penalty appeal waved away 10 minutes from time after Guido Rodriguez brought down substitute Gabriel Barbosa after his poor touch in the box.

Temperatures began to intensify in the dying stages, in what was a feisty encounter throughout with a total of nine yellow cards awarded.

A Brazilian freekick was whipped in from the left in the 87th minute, and Martinez was alert once more to tip Barbosa’s half-volley out for a corner.

Messi was then guilty of missing a glaring opportunity just before the game entered injury time.

De Paul’s brilliant through ball set the 34-year-old clear on goal from the left-hand side but the six-time Ballan d’Or winner could not sort his feet out as Ederson smothered the danger.

However, Messi was not made to rue his miss as his side withstood the Brazilian pressure, and as the whistle blew for full time – the Barcelona star was immediately mobbed by his teammates and hoisted into the air.

Joy and euphoria for Argentina as they wildly celebrated into the night, but a clear contrasting of emotions for Brazil who simply were not at their best and surrendered their reign as Copa America champions.

The PSG star has had to settle for a bit part role in Argentina’s journey to the Copa America 2021 final, however he proved to be a bright spark when coming on as a substitute against Colombia in Wednesday’s semi-final.

Despite now being 33, the former Real Madrid man looked as lively as ever during the final in Rio.

Constantly driving at the Brazilian defence with his blistering speed and intricate dribbling, he proved to be a nuisance throughout the full 90.

He then showed his class with the vital winner, a beautifully weighted lob to catch out Manchester City’s Ederson.

As Paris Saint-Germain prepare to re-claim the Ligue 1 title from Lille in the upcoming season, there can be no doubt Di Maria will still have a significant role to play within Mauricio Pochettino’s side.

It’s hard to believe that Martinez only made his senior debut for Argentina a month ago in a friendly against Chile, and now he is their certified number one choice between the sticks.

In his debut season for Aston Villa this year, the shot stopper equalled the club’s record for the most clean sheets kept in a Premier League season with 15.

The 28-year-old was the hero for Argentina in their semi-final penalty shootout against Colombia, saving three spot kicks to carry his side into their showdown against Brazil.

Although such heroics were not required this time round, Martinez was his typically commanding self on Sunday morning and produced two key saves from Richarlison in the first half and Barbosa in the second.

The Villa man finished the Copa America 2021 ranked highest for the most clean sheets, and was immediately embraced by Messi at full-time. With his captain well aware of just how vital the stopper’s stela performances have been on route to their victory in Rio.

You would have struggled to find many football fans across the globe who would not have been spurring Messi on to lift his first major tournament with his national side.

Unless you were Brazilian, of course.

The Argentina captain has starred throughout the Copa America 2021, and picked up the player of the tournament trophy, as well as the award for most goals scored in typical Messi fashion – prior to lifting the main championship with his teammates.

Although Sunday morning did not pose as one of Messi’s more memorable performances in an Argentinian shirt, the legend of the game has been the driving force behind his country’s route to the final.

The togetherness the rest of the squad showed in celebrating with their captain at full time underlined how wary they are of the service he has provided for the national side.

He will be spoken about for generations to come, and rightly so.

A night for Messi to remember, and a chapter to add to a truly remarkable career as one of the greatest players to every play the beautiful game.