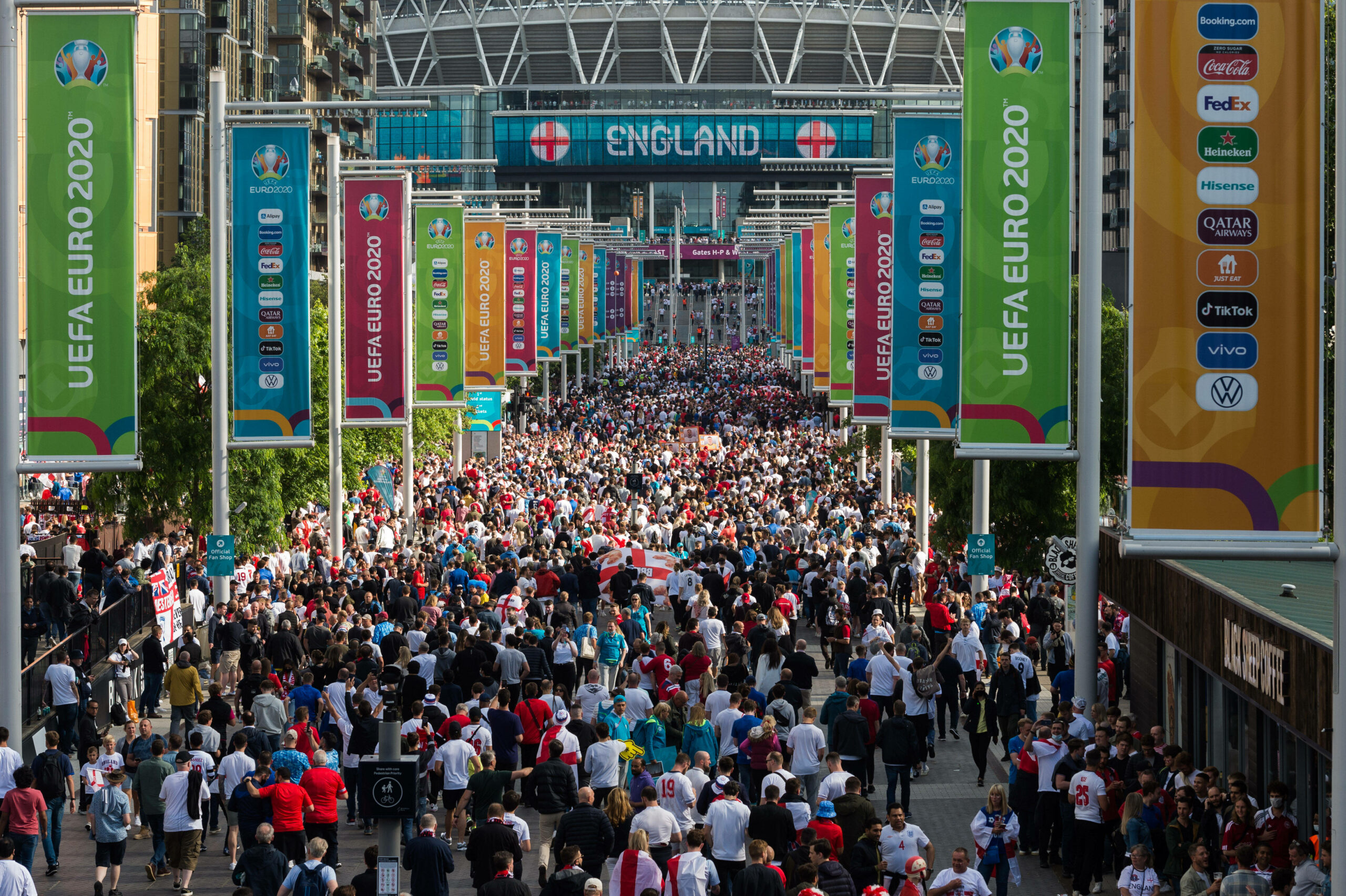 England are aiming to win a first major tournament for 55 years when they face Italy in Sunday evening’s highly anticipated Euro 2020 final at Wembley.

Despite the overwhelming support the Three Lion’s will receive due to playing on home soil, Mancini and his men will prove to be a stern test as they seek to end Euro heartbreak suffered in the competition’s finals in 2000 and 2012.

Proven Quality takes a look at both sides route to the final, players to look out for, the latest team news, and our predictions ahead of the tournament’s conclusion on Sunday night.

Since taking over the reigns as manager of the Italian national team in 2018, Roberto Mancini has reinstalled a real flair and fear to the Azzurri.

From failing to qualify for the World Cup just two years ago, Italy boast impressive wins over Belgium and Spain on route to the Euro 2020 final, scoring 12 goals and conceding just three in the process.

The Italians soared through to the knockout phases with commanding 3-0 victories over Turkey and Switzerland, whilst defeating Wales with a heavily rotated XI – underlining the quality throughout Mancini’s squad.

Question marks were raised when Austria comfortably dealt with Italy’s attacking threat over 90 minutes in their last-16 showdown, however the four-time World Cup winners showed their grit to see off the game in extra-time.

A blistering first half showing in the quarter-finals was enough to see off Belgium, whom many had tipped to reach the final, and Tuesday night’s thriller between the Azzurri and Spain emphasised the togetherness Italy possess.

They have brought real passion and spirit to Euro 2020, and England will have to be at their best if they are to prevent Italy from winning their first European Championship since 1968.

Despite topping Group D without conceding a goal, England’s football was far from glamourous as Gareth Southgate and his men progressed to the knockout stages.

However, a historic victory over the Germans in the round of 16 underlined the belief lying within the England squad.

A resounding 4-0 victory over Andriy Shevchenko’s Ukraine was to follow, filling the nation with hope that this could well and truly be England’s year.

Mikkel Damsgaard’s stunning freekick in the first half of Wednesday night’s semi-final between Denmark and England threatened to put an end to that belief, but Southgate’s men withstood the scare to prevail.

Bukayo Saka’s dangerous ball in from the right forced Denmark captain Simon Kjaer into an own goal, under pressure from Raheem Sterling as England quickly fired back.

A tense second half was followed by extra time, and Harry Kane ensured England would be back at Wembley on Sunday.

Firing home his penalty on the rebound after Sterling had been bought down in the box.

Despite the dubious call to award the spot kick, England were the stronger side in the semi-final contest, and showed the perfect response after going a goal down.

Victory over Germany, and withstanding extra time against the Danes, underlined the growing character and mental strength this England side possess, despite its average age of 25- the youngest squad going into the tournament alongside Turkey.

The scene is set perfectly on Sunday night for England to get their hands on their first European Championship.

Playing in front of a strong 65,000 crowd at Wembley, confidence running high, one game is all that stands in their way.

Gareth Southgate has the luxury of a clean slate in terms of injuries and suspensions when picking his XI for Sunday’s showpiece.

Choice of formation is likely to be the most difficult decision for the England manager to make. Debating whether to stick to a back four used against Ukraine or Denmark, or alternatively, opting for the more conservative approach with three centre-halves used against Germany in the last-16.

Kieran Trippier has slotted in perfectly on the right-hand side when called upon, and Kyle Walker’s versatility will ensure if a three-man defence is opted for, England’s defence will remain hard to break down.

Midfielders Kalvin Phillips and Declan Rice have formed a formidable partnership and will surely start on Sunday night, and Mason Mount will likely complete the trio in the middle of the park.

Whether the Chelsea playmaker operates as a No 10 or sits deeper will depend on the shape Southgate decides on.

Saka, Jack Grealish, Phil Foden and Jadon Sancho will be battling it out for a spot on the right wing to partner Sterling and Kane up top.

Leonardo Spinazzola is Italy’s high-profile absentee with the left-back suffering a ruptured Achilles tendon in the quarter-final against Belgium.

Mancini will have to decide whether he starts Emerson Palmieri again – who started his side’s semi-finals – or make alternative defensive arrangements to an otherwise settled back four.

A star-studded midfield trio of Jorginho, Nicolo Barella and Marco Veratti also look a given in Italy’s starting XI, with Federico Chiesa likely to retain his place up top with Ciro Immobile and Lorenzo Insigne after starring in Tuesday’s semi-final.

Italy and England will lock horns for the 28th time on Sunday for the Euro 2020 final, with the Azzurri leading the head-to-head contest with 11 victories to the Three Lion’s eight, whilst there have also been eight draws between the two sides.

The first ever contest took place back in 1933, with the two teams playing out a 1-1 draw in an international friendly. The most recent fixture between the sides also ended a goal apiece, with Jamie Vardy netting for England and Insigne netting a late equaliser from the penalty spot.

England’s record against Italy in major tournaments does not cast fond memories, with then manager Roy Hodgson and his players suffering penalty heartbreak to the Italians in the quarter-finals at Euro 2012.

Two years later and Mario Balotelli scored a famous winner for Italy as England were defeated 2-1 at the 2014 World Cup.

The loss capped a dismal tournament, with England finishing bottom of their group which included Uruguay and Costa Rica.

However, Southgate and his players will not be losing any sleep over past shortcomings after reaching their first major final in 55 years. Italy will be well aware of the challenging showdown that awaits them on Sunday night.

Was there ever any doubt that Kane would find his groove at the Euros?

After a quiet group stage, the Spurs talisman has scored four goals in three knockout appearances, including the decisive spot kick against Denmark in extra time that secured England’s place in the final.

The England captain has previous experience coming up against the Italian defence, specifically Giorgio Chiellini, in both legs of Tottenham’s round of 16 tie against Juventus in the 2018 Champions League campaign.

Kane scored a typically clinical goal in the first leg and will head into Sunday’s final knowing he is just a goal away from levelling with Cristiano Ronaldo and Patrick Schick at the top of the Euro 2020 goal scoring charts.

Sterling has been one of the tournaments standout performers scoring the winners in two of England’s group stage victories, the first goal against Germany in the last-16, and winning the crucial penalty against Denmark on Wednesday.

The Manchester City man has caused defenders problems with his intelligent movement and intricate dribbling, not to mention his range of passing (his exceptional pass for England’s opener against Ukraine immediately springing to mind).

The 26-year-old heads into the Euro 2020 final sky-high on confidence and will be relishing the opportunity to lift the European trophy in the stadium he lived close by to during his childhood.

Turning our attention to Italy, as mentioned previously Chiesa has no doubt secured his spot in Italy’s front three after superb performances for his country in the knockout rounds.

The Juve star broke the deadlock against Austria in extra time with a fantastically worked individual goal, and again struck first in the Azzurri’s semi-final against Spain.

The 23-year-old’s trickery and lung-busting runs have caused full backs problems throughout the tournament and the youngster never seems fazed by the calibre of opponent or pressure going into a game.

The England defence will have to be at their best to prevent the winger from adding to his two goals already scored this summer.

Chiesa’s attacking partner Insigne is also an individual capable of the spectacular, as he has shown over the years for Napoli, and indeed during this tournament with a wonderful curling effort against Belgium.

The Napoli captain possess the ability to split defences with his passing and Southgate’s men will have their hands full with an Italian side oozing in offensive quality.

Quality which is also present throughout their midfield.

Although Rice and Kalvin Phillips have shone throughout the tournament, the Italians midfield three arguably poses as the duo’s sternest challenge yet.

Verratti has mastered his craft over the years and his effortless ability to dictate play from the middle of the park will take some stopping.

Read also: Five players who could seal transfer moves after starring at Euro 2020.