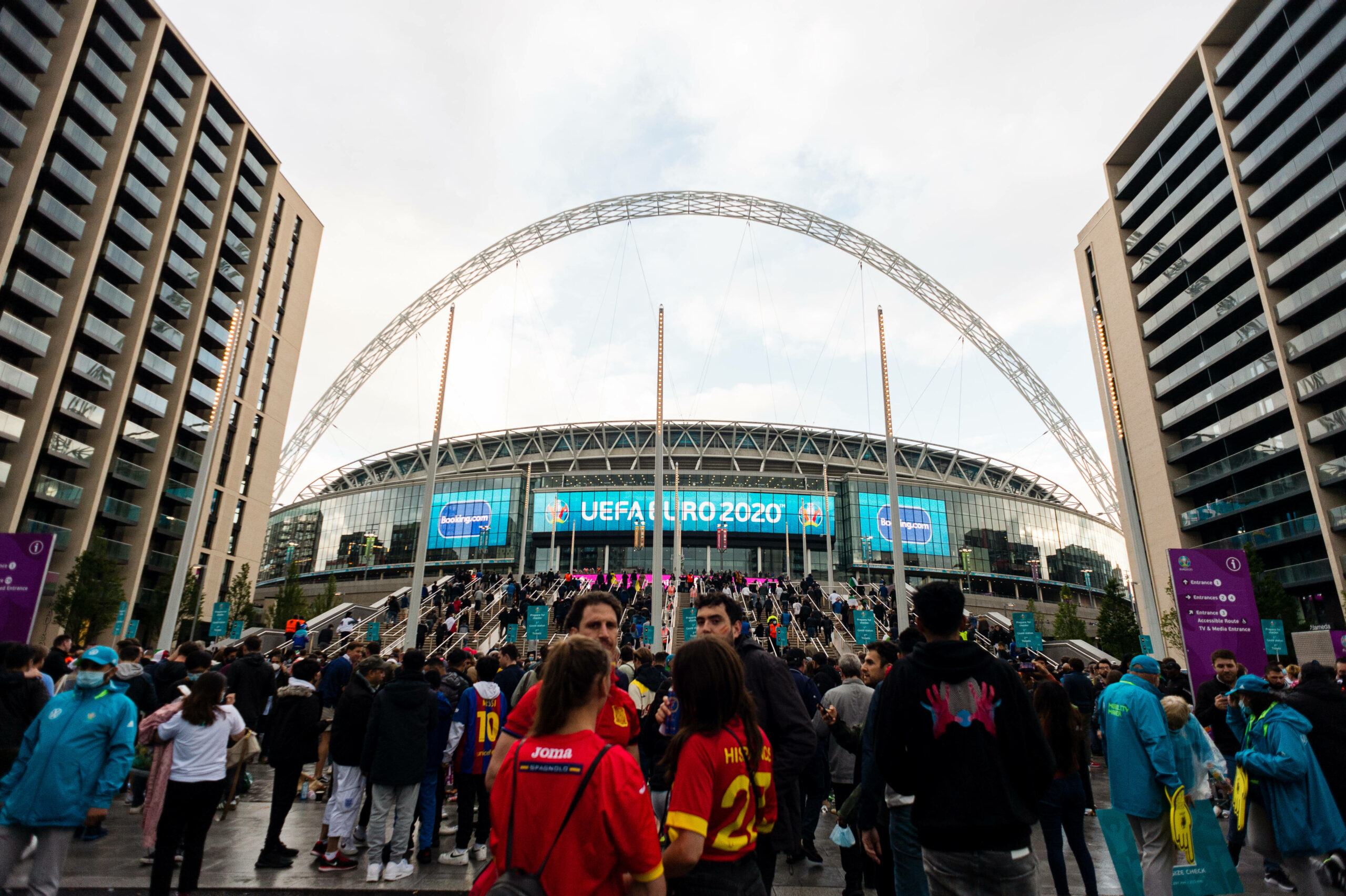 Euro 2020 – It may have been delayed for over a year, but boy it was worth the wait.

From thrilling goal fests in the knockout stages, penalty heartache, memorable victories for underdogs, and a load of last-minute drama – this summer’s European Championship really has been a tournament to savour.

Despite only three teams remaining in the competition (soon to be two), the performances from players of fallen countries linger in fan’s memories, and indeed, in the hierarchies of clubs around the world cautiously weighing up their summer transfer business.

Proven Quality takes a look at five players who we feel have put themselves in with a chance of securing an eye-catching transfer move this summer.

Despite the Netherlands’ disappointing last-16 exit to Czech Republic, the PSV Eindhoven duo lit up Euro 2020 throughout the group stages.

Denzel Dumfries chipped in with two goals and an assist from his attacking full-back position for the Oranje in Group C.

The 25-year-old, who is also PSV’s club-captain, possess a perfect balance of technical ability going forward with disciplined and resolute defending.

With attacking full-backs proving crucial to teams’ success in today’s game, it comes as no surprise that Dumfries has been linked with a host of teams throughout Europe including La Liga giants Barcelona and the Premier League’s Everton.

The versatile defender’s winner against Ukraine, and goal in the Netherland’s 2-0 victory over Austria, shows Dumfries willingness to make his way further up the pitch.

His unquestionable work rate would allow him to slot perfectly into the Premier League with its high intensity and physical nature.

Although Georginio Wijnaldum and Memphis Depay were Frank de Boer’s main goal scorers on the pitch, the work of Donyell Malen was critical to the men in orange’s eight goals scored throughout the group stages.

The 22-year-old shows composure on the ball, with his positive and direct runs allowing him to link up effortlessly with Depay in attack.

This was clear to see in the build-up for the Netherland’s first of three goals scored against North Macedonia in their final group stage game.

The PSV forward picked the ball up deep in his own half and a smart overlapping run from the former Arsenal trainee as he exchanged passes with Depay, instantly had the Dutch on the attack.

A quick one-two then followed between the pair as Malen teed Depay up for the game’s opener.

Following Borussia Dortmund announcing they have agreed a deal in principle for Jadon Sancho to join Manchester United in a £73 million deal, the German club have been strongly linked with a move for Malen, seeing him as an ideal replacement for the England star.

A player of Malen’s quality deserves to be playing Champions League football, and a move to the Bundesliga would pave the way for the young talent to take the next step in a highly promising career.

Wherever Dumfries and Malen do end up playing their football when the 2021/22 campaigns kick off in August, PSV boss Roger Schmidt has admitted he expects it to be abroad.

Teams fortunate enough to secure their signings will be understandably optimistic heading into the start of their domestic season’s.

The young Sampdoria midfielder came into Euro 2020 as a backup for star man Christian Eriksen. However, after the awful events of June 12th where Eriksen suffered a cardiac arrest – Mikkel Damsgaard was thrusted into the limelight.

The 20-year-old started Denmark’s second group game against Belgium and looked assured on the ball whilst sharing a pitch with some of the sport’s most talented players, but it was the playmakers performance against Russia that really got people talking.

Damsgaard opened the scoring for the Danes as he collected the ball on the edge of the penalty area before taking one touch to his right and unleashing a stunning dipping effort that nestled into the top corner.

Denmark’s emphatic 4-0 victory against Wales in the last-16 followed and Damsgaard grabbed an assist to complete another dynamic performance from the middle of the park.

National coach Kasper Hjulmand, who gave Damsgaard his first senior start at club level, kept the promising youngster in his starting XI for his sides 2-1 victory in the quarter-finals against Czech Republic, underlining the strong faith he has in the Sampdoria man.

Despite only arriving in Serie A in August 2020, Damsgaard took little time to settle, as he went on to make 35 league appearances in his first season, scoring two goals and making four assists.

As well as boasting an irresistible combination of being flamboyantly gifted and a hard worker, Damsgaard plays with an outstanding level of maturity that you would expect from players 10 years his senior.

Leicester City and Tottenham are just two teams from a long list of sides eyeing up a move for the talented youngster, and all eyes will be on Damsgaard when his side take on England in the second Euro 2020 semi-finals.

Manuel Locatelli impressed throughout the group stages for the Azzurri, effortlessly slotting into Roberto Mancini’s midfield three in the absence of Marco Verratti.

The Sassuolo man is ranked second amongst Euro 2020 players for tackles successfully completed, with his 14 only bettered by teammate Verratti’s 21.

The versatile midfielder’s tackling ability is just one of his many traits, with his movement off the ball and pin-point passing key to a highly successful Euro 2020 campaign.

The 23-year-old was influential in Italy’s 3-0 victory over Switzerland in their second Group A fixture, scoring twice and picking up the man of the match award.

For his side’s first, Locatelli sent a beautiful first time ball out to the right-hand side from inside his own half, before completing a 68-yard run into the penalty area to cap off a fine move.

His second, just seven minutes into the second half, showed his offensive talents as he thundered home a fierce drive from the edge of the box.

Despite his penalty miss in last night’s semi-final victory against Spain, Locatelli played a crucial role in nullifying La Furia’s attacking threat during extra time, after coming on as a late substitute.

Arsenal and Juventus are heavily interested in acquiring the midfielder’s services, with the Old Lady seen as his preferred destination.

Locatelli already has 99 Sassuolo appearances to his name, and with proven Serie A experience and the ability to deliver on the biggest of stages, there can be no doubt that the central midfielder would pose as a feather in Juve’s cap as they bid to regain the Scudetto when the new season kicks off in August.

Czech Republic have been one of the surprises at Euro 2020, knocking out the Netherlands on route to an eventual quarter-final exit.

One man who has been key to their success is their number 10, Patrik Schick.

The 25-year-old looks set to finish the tournament as joint-top goal scorer alongside Cristiano Ronaldo, with the pair level on five.

Schick has impressed throughout Euro 2020 with his powerful presence in the box and his clinical finishing.

Equally as commendable, has been the all rounded nature to the striker’s game. Confident in the air, capable of the spectacular, and able to cut out opportunities for those around him.

Spurs and Everton are among the suitors weighing up a move for the former Roma striker, and with Bayer Leverkusen missing out on next season’s Champions League, the club could be willing to listen to offers.

Schick netted 13 goals in all competitions for the German outfit last campaign, and his confidence has only risen since the Euro’s.

With the previous success West Ham have enjoyed from their Czech recruitment through Tomas Soucek and Vladimir Coufal, a Premier League side making a move for one of the stars of Euro 2020 could pose as a shrewd bit of business.