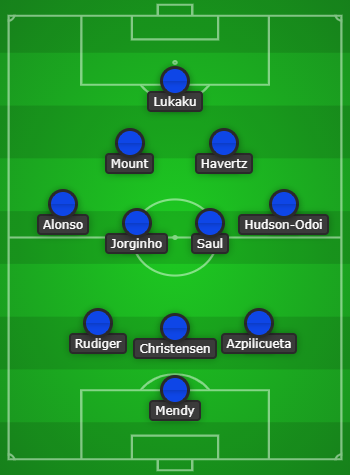 Chelsea will be aiming to return to winning ways when they host Aston Villa in the Premier League tomorrow.

The Blues started the season with back-to-back convincing wins before playing out a 1-1 draw against Liverpool.

The point was a valuable one for them, having played with 10 men for the entire second half.

The west London giants will now take on the Villans, who they have not beaten in two attempts.

Villa played out a 1-1 draw at Stamford Bridge last term before a 2-1 triumph at Villa Park on the final matchday.

Thomas Tuchel will be without N’Golo Kante for the game after his hamstring injury before the break.

Christian Pulisic suffered a fresh ankle concern on international duty, and he has also been sidelined.

Aside from the duo, Thiago Silva could be available due to a FIFA-imposed five-day suspension.

Edouard Mendy has firmly established himself as the first-choice goalkeeper ahead of Kepa Arrizabalaga. He is expected to start tomorrow.

No changes are likely in the backline. With Silva suspended, Cesar Azpilicueta, Andreas Christensen and Antonio Rudiger could form the central defence.

Reece James has been in fine form this campaign with his regular overlapping runs and crosses into the box.

However, he is suspended which could pave the way for Callum Hudson-Odoi’s inclusion at right wing-back.

Marcos Alonso could get the nod over Ben Chilwell on the opposite flank. Alonso excels in the wing-back system, and he is also a superb dead-ball specialist.

There will be an enforced change in the centre of the park with Kante not fit enough after his hamstring concern.

Both Jorginho and Mateo Kovacic were actively involved during the international break. Tuchel may consider starting one of them from the bench.

We fancy Kovacic to feature as a substitute which could pave the way for Saul Niguez’s club debut. The Spaniard arrived in a surprise deadline day move.

The attack could be identical to recent league matches. Mason Mount and Kai Havertz could continue in the attacking midfield positions behind Romelu Lukaku.

Lukaku confirmed a minor groin injury during the international break, but Tuchel has confirmed that he is fully fit to face Villa. He is expected to start ahead of Timo Werner up front.