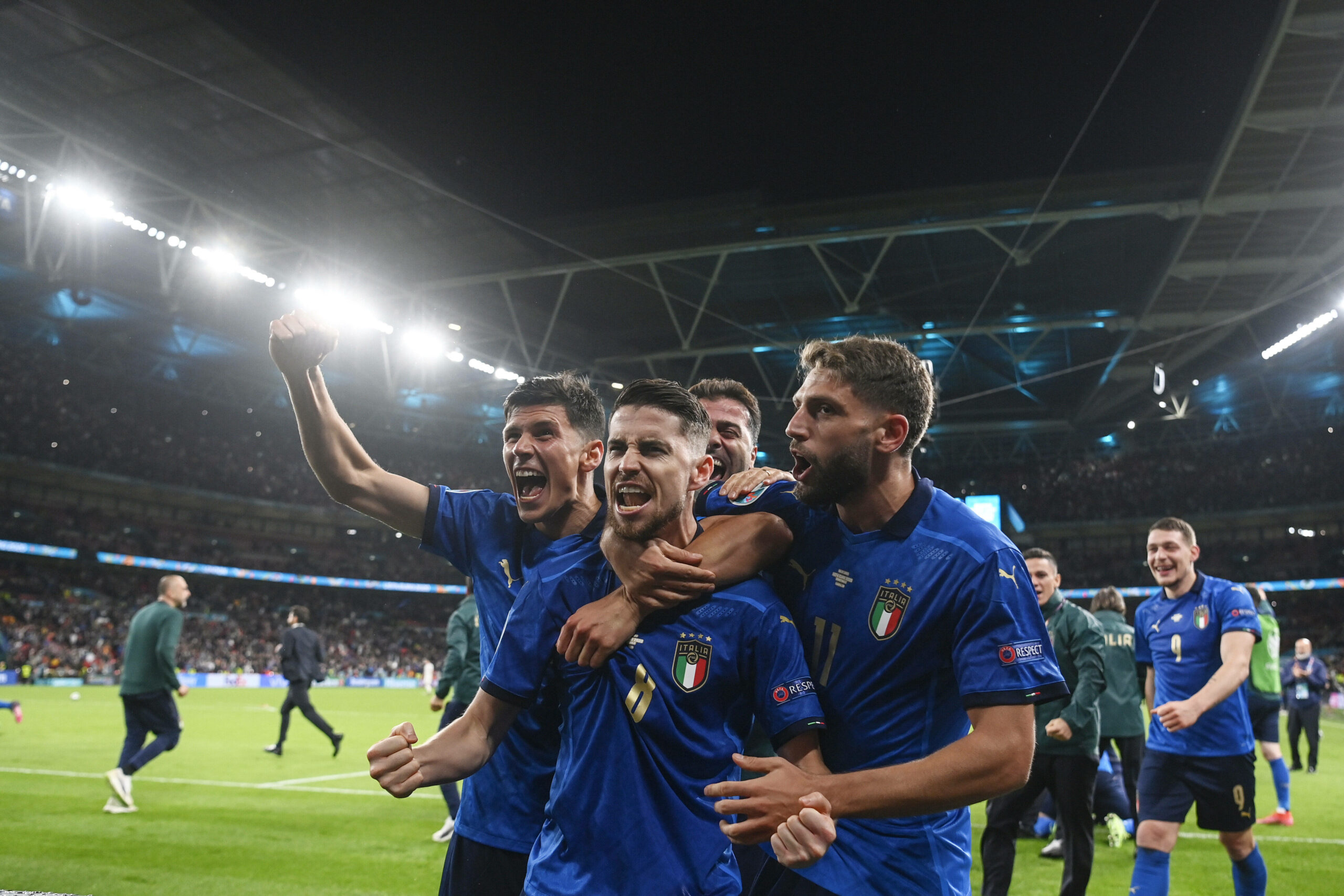 Italy progressed to Sunday’s Euro 2020 final after defeating Spain 4-2 on penalties, with Jorginho scoring the decisive spot kick at Wembley on Tuesday night.

The Azzurri headed into the highly anticipated fixture in red hot form after impressively knocking out Belgium in last Fridays quarter-final, and immediately started on the front foot.

Emerson – replacing star man Spinazzola who ruptured his Achilles against Belgium – sent a perfectly weighted through ball down the left for Nicolo Barella to latch onto four minutes into the game, with his deflected effort hitting the post.

Despite the Inter Milan player being offside, it was an early warning sign fired at Spain.

However, La Furia Roja settled into the game after a difficult opening ten minutes, and Mikel Oyarzabal spurned a glorious opportunity to put Spain ahead on the night.

Pedri Gonzalez showed excellent vison to slip the ball through for the Spanish forward, however his first touch was poor, and Emerson was quick to clear the danger.

With just over 20 minutes on the clock, a neat one-two between Lorenzo Insigne and Emerson sent the latter charging down the left flank.

Goalkeeper Unai Simon was quick off his line, but his decision looked rash as Emerson cut the ball back to Ciro Immobile who laid it off to Barella, but the midfielder was unable to get his shot away with Sergio Busquets nicking back possession just in time.

Five minutes later and it was Spain’s turn to push for the game’s opener.

Pedri played Oyarzabal down the right-hand side and the striker’s cut back found its way to Dani Olmo in the Italian penalty area with the RB Leipzig man forcing Donnarumma into a smart save.

On the stroke of half time Insigne drove into the box one-on-one with Cesar Azpilicueta and slipped Emerson in down the left.

The Chelsea defender fired an effort towards goal that grazed the top of the crossbar as referee Felix Brych bought an end to the opening 45 minutes.

The high intensity continued in the second half with Immobile shooting wide after getting the wrong side of Aymeric Laporte, and Busquet’s narrowly firing over before Federico Chiesa and Oyarzabal both saw efforts on target.

Spain had begun to control the game and looked the more likely of the teams to grab the first goal.

Then up stepped Chiesa on the hour mark.

It was a blistering counter-attack from Roberto Mancini’s side as Donnarumma rolled the ball out to Verratti, who passed it on to Insigne, who’s through ball to Immobile was well intercepted by Laporte.

With the ball falling to Chiesa, the Juve player brilliantly curled home with Simon rooted to the spot, as he wheeled away wildly celebrating his second goal in three games.

Spain really should have been level five minutes later as Oyarzabal missed another glorious chance, this time unable to get any sort of connection on Koke’s clever clipped ball over the top of the Italian defence.

Domenico Berardi looked lively for the Azzurri after coming on in the 62nd minute and forced Simon into two alert saves.

Italy stood firm as Spain pressed for an equaliser, but with 10 minutes left to play, Luis Enrique’s side broke the Italian’s resilience.

Alvaro Morata, who had been dropped prior to kick off, came off the bench to hall his country back into the tie.

After playing a neat one-two with Olmo, the Juve man showed composure to calmly slot the ball past Donnarumma.

Spain, galvanised by their goal, pushed for a late winner but the game was forced into extra time with the score level at 1-1.

La Roja twice came close in the first half as Donnarumma was forced into parrying Olmo’s low freekick and then punched Moreno’s cross, sparking frantic scrambles on both occasions.

After the break, it was Italy with the half-chances. Berardi had a strike well-blocked by Laporte and then hit the back of a net with a smart strike from a tight angle, however the goal was promptly chalked off with the Sassuolo forward clearly offside.

As the game gradually geared towards the 120th minute both teams began to tire before the whistle was eventually blown for a decisive penalty shootout.

Manuel Locatelli stepped up first for the Azzurri and his effort was saved by Simon, with the Spanish goalkeeper quickly down to his right to prevent the substitute from scoring.

Olmo then fired wildly over the bar for Spain before Andrea Belotti dispatched a perfect penalty into the bottom left corner. Gerard Moreno levelled things up for Spain as Bonucci stepped up to take Italy’s third.

Next up was Federico Bernardeschi who brilliantly rifled the ball home into the top right corner. Morata then stepped up for Spain, however his tame penalty was comfortably saved by Donnarumma.

Chelsea midfielder Jorghino was left with the all-important kick from 12-yards, knowing he had the chance to send his country through to the Euro 2020 final, and the Champions League winner made no mistake with an ice-cold finish.

Italy’s triumph underlines a remarkable change in fortunes since Roberto Mancini’s appointment in 2018.

From missing out on qualification for the 2018 World Cup, the Azzurri have now extended their unbeaten run to 33 games and will host the winners of tonight’s second semi-final clash between England and Denmark.

Gianluigi Donnarumma (7/10) – An assured performance from the 22-year-old. Comfortably dealt with threats from the flanks and saved crucially to deny Morata in the shootout.

Giovanni Di Lorenzo (6/10) – Dealt with Feran Torres’ threat down the left-hand side but did not offer much going forward. Comfortably adapted at left-back to see out extra time.

Leonardo Bonucci (7/10) – Comfortable showing from the Juve man despite losing Morata for Spain’s equaliser. Crucially scored in the shootout.

Giorgio Chiellini (7/10) – Typically dominant display from the veteran. Won almost all aerial battles and was consistently accurate with his forward passing.

Emerson Palmieri (7/10) – A respectable showing from the Chelsea man stepping in for Spinazzola. Combined well with Insigne down the left-hand side and looked a threat going forward.

Nicolo Barella (6/10) – Often clumsy in possession that on another day could have led to a goal. Serie A’s MVP midfielder capable of an awful lot more.

Jorginho (7/10) – Starved of the ball in midfield due to Spain’s dominance in possession, but came up trumps with the decisive spot kick. Will be a crucial player for Italy in midfield for Sunday’s final.

Marco Verratti (7/10) – Unusually quiet in midfield but was alert to instigate Italy’s counter attack for the game’s opener.

Federico Chiesa (8/10) *MOTM* – Another lively performance from the 23-year-old. Has been one of Italy’s standout players during the tournament and took his goal exceptionally well. Persistently caused the Spanish defence a nuisance down the right flank.

Ciro Immobile (6/10) – The Lazio man was often feeding off scraps up top but worked tirelessly to instigate opportunities for those around him.

Lorenzo Insigne (7/10) – Linked up effortlessly with those around him, smart movement off the ball, and his beautiful through ball ultimately lead to his side’s opener.

Domenico Berardi (7/10) – Looked lively when he came on and constantly looked to make things happen in the final third. Came close to extending Italy’s lead in the second half.

Unai Simon (7/10) – Little he could do for Italy’s goal and kept Spain in the game when they were trailing. Saved well from Locatelli’s spotkick.

Cesar Azpilicueta (7/10) – Solid defensively and was a threat going forward. Replaced shortly before the end of normal time.

Eric Garcia (7/10) – A respectable showing from the soon to be Barcelona player. Did everything Enrique asked of him in replace of Pau Torres.

Aymeric Laporte (8/10) – Commanding display in the heart of Spain’s defence, countless tackles and blocks, and desperately unlucky for Italy’s opener.

Jordi Alba (7/10) – Nullified all attacking threat down his flank and ventured forward whenever possible.

Sergio Busquets (7/10) – A vintage display from the veteran. Controlled the ball in the middle of the park, however should have done better with his opportunity in the second half.

Pedri Gonzalez (8/10) – Another remarkably mature performance from the 18-year-old. Composed on the ball and came up with a series of defence-splitting passes. Worked endlessly for his side.

Ferran Torres (6/10) – Looked lively on the left-hand side but lacked the cutting edge in the final third. Replaced with half an hour to play of normal time.

Mikel Oyarzabal (6/10) – A frustrating night for the Real Sociedad forward, missed two glorious chances. One in the first half and one in the second. Things could have turned out a lot better for Spain if he had been more clinical. Did look lively whilst on the pitch and was always looking to link up with those around him.

Dani Olmo (7/10) – Spain’s most threatening man on the night. Intricate dribbling and smart movement made things very difficult for Italy. Poor penalty but combined excellently with Morata for the equaliser.

Alvaro Morata (6/10) – Hero to zero for Spain’s number seven. Linked up brilliantly with Olmo to haul his side back into the tie but his weak penalty proved decisive.

Rodri (6/10) – Filled in comfortably after replacing Koke, nullified Italy’s attack in the final twenty minutes of the 90, and throughout extra time.