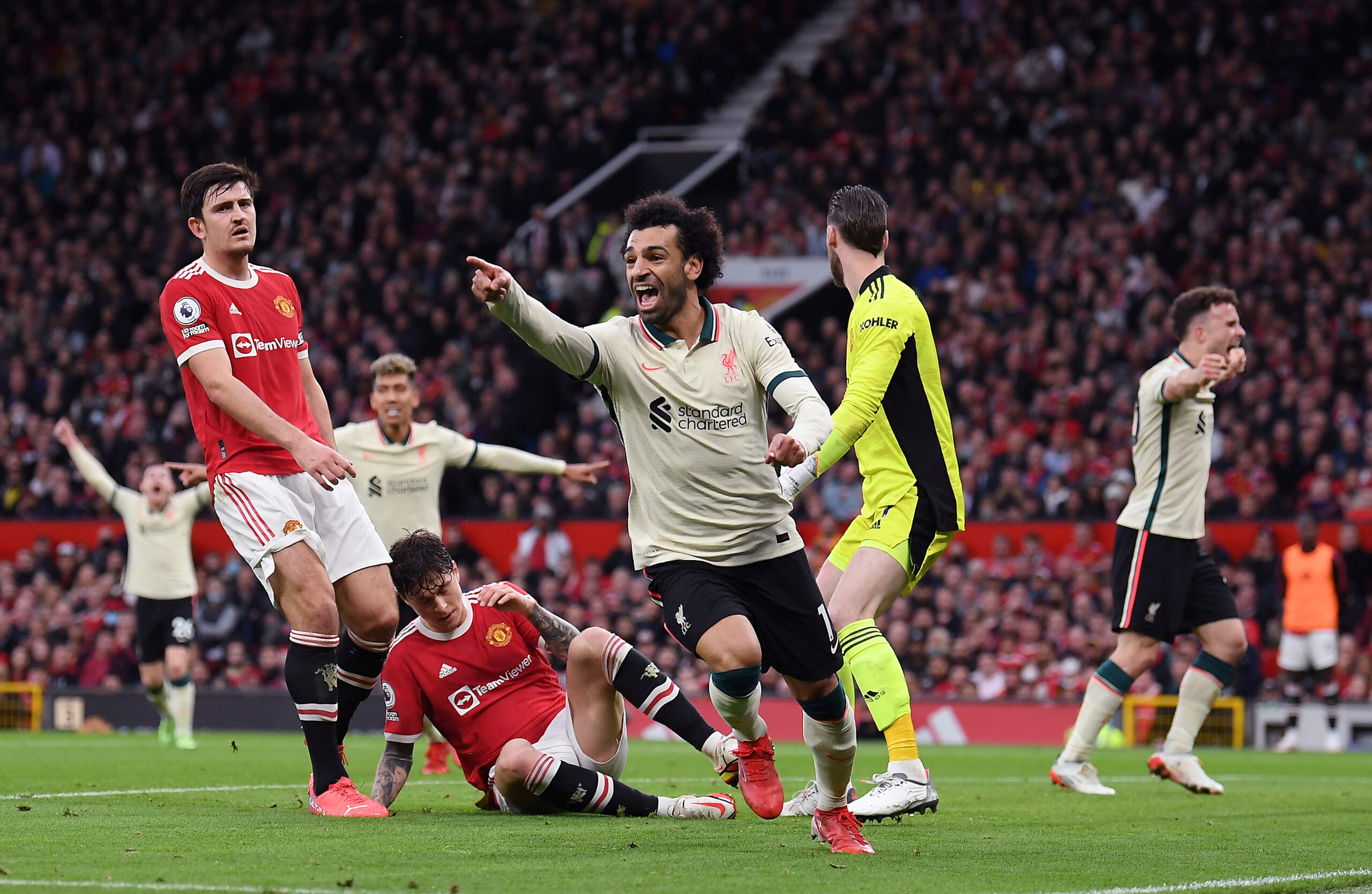 The visit of Liverpool is usually a hotly anticipated occasion for Manchester United fans. It’s their biggest fixture of the league campaign and often produces a cracker.

However, this time around, the supporters weren’t so excited. Jurgen Klopp’s side were still unbeaten in all competitions, with star man Mohamed Salah in the form of his life.

By contrast, the hosts had been wildly inconsistent. Despite a big summer of spending, they had won just half of their games, leaving them off the pace in the title race.

And it panned out as per the form book, as the away side steamrolled their opposition. Naby Keita made it 1-0 early on, and Diogo Jota soon added a second. And it was not long before Salah got in on the act, claiming the match ball with a magnificent hat-trick.

With 40 minutes remaining, Liverpool showed some mercy and took their foot off the gas at 5-0. But even then, there was time for more Man Utd misery, as substitute Paul Pogba was shown a red card for a dreadful challenge on Keita just 15 minutes after coming on.

The Sky Sports cameramen managed to sum up the mood perfectly. First, we saw a shot of a dejected Sir Alex Ferguson, watching his once-great side get humbled. Next, they cut to a smiling Kenny Dalglish, overjoyed at watching a Reds team at the top of their game.

And here’s the thing: it wasn’t even that shocking. Man Utd’s performances of late have been building up to a result like this.

When you concede five in one game, the defence is going to come under some scrutiny. On Sunday, they lined up with a back four that cost almost £200 million, with the infamous ‘McFred’ midfield partnership in front of them. It was a cautious set-up.

And yet, they were torn apart with ease. Just five minutes into the game, Liverpool find themselves with a 3-on-1. Salah has all the time in the world, with Andy Robertson to his left and Keita to his right, and only Luke Shaw standing in his way. The Egyptian rolls it to Keita, who slots home for the opener.

And the Man Utd backline managed to outdo themselves with some more comical defending eight minutes later. Harry Maguire and Shaw get in each other’s way, allowing Keita to play the ball wide for Trent Alexander-Arnold. He slides one across for an unmarked Jota to double their advantage.

From then on, it was the Salah show. He gave Shaw a nightmare afternoon and went home with three more goals to his name.

But this wasn’t just an off day for the Red Devils’ defence. Many had seen this coming.

Amid the hype of the comeback victory against Atalanta, club legend Paul Scholes warned Man Utd of their weaknesses at the back. Similarly, Gary Neville had been fearful of the outcome once they played a top side.

In the 20 games before Sunday, Man Utd had kept just one clean sheet. That came at Molineux in the 1-0 victory over Wolverhampton Wanderers, when Francisco Trincao, Joao Moutinho, and Romain Saiss all missed glorious chances. It was not strictly by design.

And in those 20 games, the toughest opponents they faced were a Liverpool side with Nat Phillips and Rhys Williams at centre-back. The next most difficult were Leicester City.

You can sometimes get away with their standard of defending when you’re up against teams who don’t have world class forwards. But when you’re facing Salah, you need to be tighter at the back.

Next weekend, Ole Gunnar Solskjaer leads his men into a clash with Tottenham Hotspur. They haven’t been anywhere near their best this season, but Harry Kane and Heung-min Son will be looking to fill their boots up against this Man Utd backline.

The following league fixture is against bitter rivals Manchester City. We don’t need to tell you how strong they are in attack. This could be a massacre if things don’t improve.

At the time of writing, Man Utd have conceded 15 goals in nine league games. Only Norwich City, Newcastle United, Leeds United and Watford have shipped more. For a supposed title contender, this is utterly disgraceful.

Not Working as a Team

Even when they were getting good results, Neville was critical of the performances, claiming that Man Utd were “a group of individuals“. One month on, and his comments remain true.

Just look at the pressing for the first goal. Mason Greenwood half-heartedly goes towards Virgil van Dijk, who has a simple pass out to Robertson. Aaron Wan-Bissaka then drags himself out of position to press the Scotsman, who plays it down the line to Jota.

He slips it inside for Roberto Firmino, who has plenty of time to pick out Salah. The winger is onside due to Shaw being far deeper than the rest of the defensive line. He finds Keita, who finishes it off. It wasn’t even a particularly impressive move.

Throughout the afternoon, it was all so disjointed. There doesn’t seem to be much cohesion in this team. No noticeable style, no patterns of play – nothing. At both ends of the pitch, it’s a problem.

There is enough individual quality in Solskjaer’s ranks to win games. But you can’t rely on moments of magic every single week. It simply won’t happen.

The players may have come under fire for their performances, but there is one man who has taken the majority of the criticism – Ole Gunnar Solskjaer. The Norwegian is now under more pressure than ever before to deliver.

The former striker took over at a difficult time at Old Trafford. He has guided them back into the Champions League and taken them to a position where they can realistically expect to compete for the biggest trophies.

He’s taken them closer to the Premier League title than David Moyes, Louis van Gaal, and Jose Mourinho, and for that he deserves a lot of credit.

But now it’s time to reach that next level. After finishing in second place last season, the Red Devils signed three top-class players. This term, a strong title challenge is demanded at the very least.

To reach that level, you can’t have major limitations as a manager. You can’t be incapable of keeping clean sheets. You can’t be unable to unify a team of world-class talent.

Aside from Sunday’s game, Man Utd have gone into every game as strong favourites this season. They have been expected to win every game fairly comfortably.

Of course, you’re not going to win 4-0 every weekend. Every team has slip-ups and off days. But from their 13 fixtures, they’ve only won two by more than one goal. They’re not dominating games. It’s a serious concern.

And it’s been this way for a while. Since the start of last season, they have fallen behind in 35 games in all competitions out of a possible 74.

By comparison, Man City have gone behind in 19 games in that time frame. Chelsea have gone down in 18, despite their struggles during Frank Lampard’s reign.

Liverpool have only fallen behind on 22 occasions in that time, even with their nightmare start to 2021.

In fairness to Man Utd, they’ve come back to win in 15 of those matches. This shows some spirit and desire in the squad. But it simply isn’t sustainable. You can’t rely on comebacks every match.

A better manager would have this squad competing for the league title. And, right now, they aren’t getting anywhere close.

Over the next month, Man Utd face Tottenham, Atalanta, Man City, Watford, Villarreal, Chelsea and Arsenal. If they don’t raise their game, it will be another set of poor results and the end of their title hopes.

But many fans have already made their minds up. They believe that Solskjaer has taken them as far as he can, and now it’s time to bring in a proven top-level manager.

With Antonio Conte and Zinedine Zidane available, the options are there.

Read also: Who will be Newcastle United’s next manager?