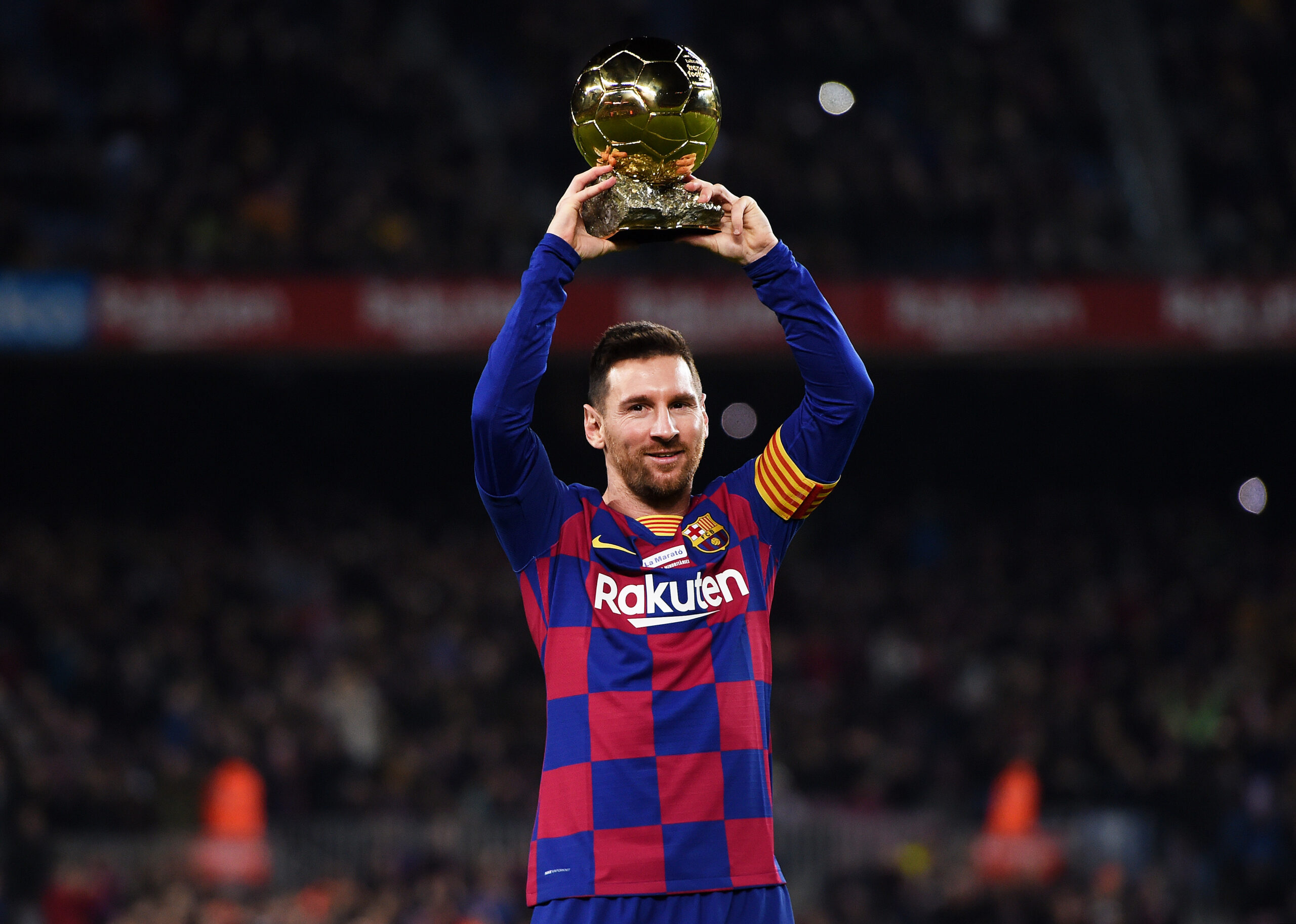 France Football, the founders of the prize, have released the 30-man shortlist for this year’s edition of the award.

It will come as a shock to no one that the likes of Lionel Messi and Cristiano Ronaldo are back among the nominees, having shared the stage for over a decade.

But there are also some surprise inclusions and exclusions. For example, only one Bayern Munich player makes the shortlist (no prizes for guessing who).

In anticipation of the 2021 Ballon d’Or award, here is our ranking of the 30 nominees.

Raheem Sterling enjoyed a highly productive Europan Championship campaign, scoring three and assisting one. However, he lost his place in the Manchester City side and is now rumoured to be on his way out. It’s a very generous nomination.

Simon Kjaer is in a similar boat to Sterling. Did little of note at club level but won himself a place on the shortlist due to an impressive summer.

The Algerian scored three goals in two games against Paris Saint-Germain to send Man City to the Champions League final. Aside from that, he wasn’t exactly a standout.

The veteran missed large parts of what was a very disappointing season for Juventus. However, he redeemed himself with an excellent showing at Euro 2020.

Pedri is well on his way to becoming a superstar and announced himself with an impressive breakthrough season. However, it feels like he has been given this nomination largely based on hype. Teammate Frenkie de Jong may feel aggrieved to have missed out over the teenager.

The Spaniard often goes under the radar, but he continues to be a consistently top-level defender. This year, he captained Chelsea to the Champions League and helped Spain to the semi-finals of Euro 2020.

Mason Mount was named as Chelsea’s Player of the Year last season and recorded an assist in the Champions League final. Along with reaching the Euro 2020 final, it was a strong year for the midfielder.

However, he may have been disappointed with his displays during the summer, having been one of England’s weakest performers. Nonetheless, a strong year.

From Italy’s triumphant midfield, Nicolo Barella was the one who caught the least attention, with Jorginho and Marco Verratti gaining most of the plaudits. Despite this, he still had a strong tournament. Throw in his Serie A title with Inter Milan, and it’s been a good year for the Italian.

One key part of that title-winning Inter Milan side was Argentinian forward Lautaro Martinez. The 24-year-old bagged 17 league goals and assisted a further six for Antonio Conte’s men.

He carried this form into the Copa America as Argentina ended their 28-year trophy drought, scoring three times.

The world’s most expensive player will not have been happy with his performances for Paris Saint-Germain last season. His numbers were respectable, but he missed over half of the league campaign.

But the dazzling Brazilian made amends with a sensational output at the Copa America. He was named as joint Player of the Tournament with club teammate Lionel Messi, as Brazil reached the final.

2018’s champion is back to contest for the award once again.

Even at 36 years old, Luka Modric continues to be one of the finest players in world football. He showcased his talent once again with several excellent displays in the heart of Real Madrid’s midfield.

Although, exiting the year without any silverware will harm his chances.

Phil Foden had a very good end to last season and could have put himself in the frame for the prize had he continued to shine during the summer. But he didn’t and ultimately lost his starting XI place to Bukayo Saka. This leaves him out of the picture.

An excellent Euro 2020 elevates Leonardo Bonucci into 18th place. The 34-year-old was one of the players of the tournament, scoring a vital equaliser in the final at Wembley.

His club campaign wasn’t so promising, as Juventus finished way off champions Inter Milan. Although they were able to get their hands on the Coppa Italia, so it wasn’t all bad.

Not many people have acknowledged Gerard Moreno’s incredible 2020/21 season. The forward bagged 30 goals for Villarreal, including the opener in the Europa League final against Manchester United.

Furthermore, he was named as the Europa League’s Player of the Tournament, as he helped the Yellow Submarine lift their first-ever major trophy.

Unfortunately, he could not recreate this during the summer with Spain, and his missed penalty in the group stage game against Poland proved to be costly, as it led to Luis Enrique’s men finishing second in their group.

In the Premier League, there were very few who could match Bruno Fernandes for performance. He was the third top goalscorer, as well as the second top creator.

He was unable to get his hands on a trophy and did little of note during the summer. This has severely impacted his ranking.

After being cast out by Barcelona, many believed that Luis Suarez’s career at the top level was over. But he silenced the doubters with a sensational season with Atletico Madrid, scoring 21 as they won the league title.

However, he failed to score in the Champions League or during the Copa America, leaving him out of the running. Nonetheless, a successful year for the Uruguayan.

It seems like a long time ago now, but there was a point when Ruben Dias was arguably the frontrunner for the Ballon d’Or. He looked on course for the PFA Player of the Year award, was closing in on the Champions League, and was expected to do well at Euro 2020.

But it wasn’t to be. He missed out on all three and was noticeably underwhelming at the European Championships.

As the only goalkeeper on the shortlist, Gianluigi Donnarumma is almost nailed on for the Yashin Trophy. And, to be fair, it’s fully deserved.

The youngster showed his immense potential during Euro 2020, winning Player of the Tournament having been the hero in two penalty shootout victories. He later made a move to Paris Saint-Germain on a free transfer.

The playmaker was once again a star for Manchester City, winning his third Premier League title and his second PFA Player of the Year award. But there are question marks over whether he merited the prize.

The Belgian showed some of his best stuff during Euro 2020 and the Champions League but wasn’t quite at his brilliant peak. An ankle injury picked up in the round of 16 fixture against Portugal held him back somewhat.

Ending Juventus’ nine-year stronghold on the Serie A title was going to be a challenge, but it was a test that Inter Milan passed with flying colours. And striker Romelu Lukaku was the most important piece of Antonio Conte’s puzzle.

The former Manchester United man was excellent for the Nerazzurri, scoring 30 goals and winning Serie A MVP.

On top of this, he added to his obscene record on the international stage with 11 goals in 12 in all competitions – including four at Euro 2020.

The 28-year-old returned to Chelsea this summer and has made an immediate impact. With Lukaku in the side, the Blues look like genuine title contenders.

Having won both the Champions League and Euro 2020, Jorginho’s Ballon d’Or campaign has gathered a bit of traction. However, this is an individual award, and let’s be honest – Jorginho was not the best individual over the last year.

Nonetheless, he was still an important part of two highly successful sides. He deserves a lot of credit.

For his extraordinary standards, it’s been a bit of a disappointing year for Cristiano Ronaldo. No knockout goals in the Champions League or European Championships while missing out on the league title.

But even then, he won two Golden Boots and won the Premier League Player of the Month award at the first time of asking since his return to Manchester United. He’s still been excellent.

Given his antics during the transfer window and his disappointing start to the season, it’s easy to forget just how brilliant Harry Kane has been for most of 2021.

He ended last season with the most goals and most assists in the Premier League – only the third player in history to pull off this feat. In addition, he was the top scorer in the knockouts of Euro 2020. All that was missing was a trophy.

Since the appointment of Thomas Tuchel at Stamford Bridge, N’Golo Kante has looked very much back to his best. This was most evident during the Champions League when he was named as Man of the Match in both legs of the semi-final and then in the final.

He wasn’t quite at this level during the summer, but he has still enjoyed a very impressive year.

Liverpool’s Egyptian king is making a case for being one of their greatest ever players and one of the best wingers the Premier League has ever seen.

The forward continues to be breathtaking for the Merseyside club. He was the runner-up in the Golden Boot race last season and currently leads the way for this year’s award.

Following memorable performances at the Camp Nou and the Allianz Arena in the Champions League, Kylian Mbappe seemed to be way out in front in the race for the Ballon d’Or. He ended the season with a sensational 42 goals in all competitions.

But he failed to capitalise on this, winning just one trophy and underperforming during Euro 2020. He was unable to score during the tournament and missed the decisive penalty as France suffered a shock elimination to Switzerland in the round of 16.

At just 21 years of age, it’s frightening to think what Erling Haaland could become. The Norwegian has been brilliant since his move to Borussia Dortmund from RB Salzburg, averaging over a goal per game in all competitions.

In the 2020/21 season, Haaland scored 41 goals in 41 outings and was the Champions League’s top scorer with ten.

The only drawback to his season was Euro 2020, which he was absent from as Norway failed to qualify.

He’s been around for a while, but Karim Benzema has never been as good as he is now.

Last season, he ended the term with 30 goals in all competitions, and he added another four at Euro 2020. But it’s the beginning of the 2021/22 campaign where he has staked his claim for the Ballon d’Or.

In just eight league games, the Frenchman has scored nine goals and assisted seven. This puts him top of both charts in Europe’s top five leagues.

Having been cruelly robbed of the prize in 2020, Bayern Munich talisman Robert Lewandowski is back among the leading candidates for the Ballon d’Or.

Over the last year, no one can match the striker for goals. In 40 appearances, he bagged an astonishing 48 goals. This includes 41 in the Bundesliga, breaking a long-standing record held by the great Gerd Muller.

Even in a below-par Poland side, he continued to bang them in, hitting three in three during the Euro 2020 group stages.

This hasn’t been one of Lionel Messi’s strongest years. And yet, he is still the favourite to win the Ballon d’Or.

At club level, the forward was marvellous, winning the Pichichi and scoring a brace in the Copa del Rey final to end Barcelona’s mini trophy drought. He ended the season with 38 goals in all competitions.

But it was on the international stage where he put on a show. During this summer’s Copa America, Messi put in one of the best individual displays in history, finishing as the tournament’s top goalscorer and top playmaker.

In the process, he helped end Argentina’s long wait for a trophy and finally got his hands on that elusive piece of international silverware.

His start at Paris Saint-Germain hasn’t been as explosive as many expected, but a stunning goal in the Champions League against Manchester City has given us an indication of what’s to come.

All things considered, it’s looking likely that Messi will be adding a seventh Ballon d’Or to his collection.

Newcastle United takeover: What happens next?
Newcastle’s takeover is good news – but they must be careful