Tactical Analysis: Kieran Tierney’s absence against Aston Villa might have been a blessing in disguise for Arsenal 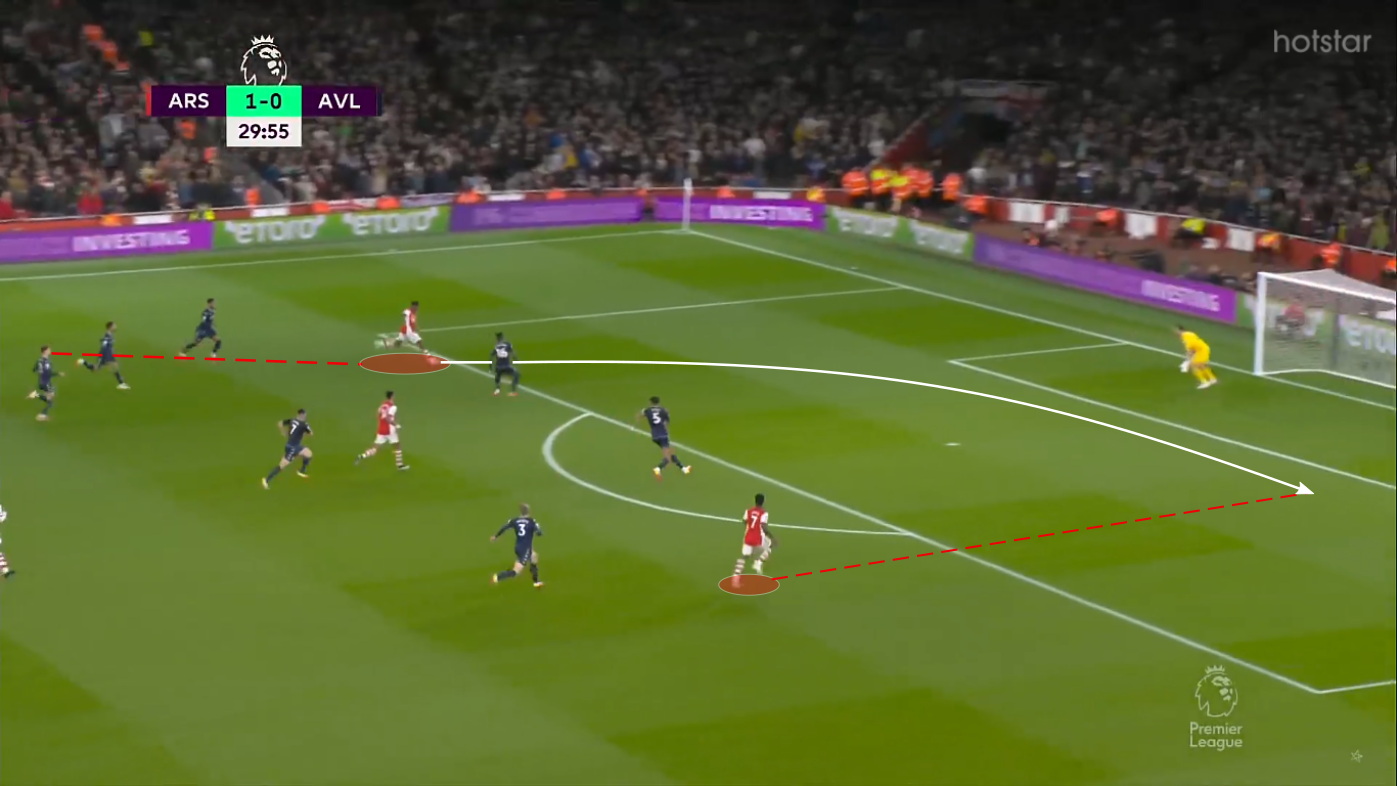 Injuries are typically never a good thing for a football club, especially when one of your key players is sidelined.

In Arsenal’s case, they had to make do without impressive left-back Kieran Tierney for at least their English Premier League match against Aston Villa, with the Scottish international being one of few consistently good performers in what has been a difficult year for the club.

And yet, his absence proved to be a good thing for the Gunners in a way, as summer signing Nuno Tavares had a flying full Premier League debut.

In truth, Tierney’s performances had just started to dip after the start of the season, so perhaps a change was needed at left-back, and there is no easier change than an enforced one.

The 24-year-old Scotsman delivered a superb showing in an otherwise terrible match for his side on the opening day 2-0 defeat at the hands of Brentford, where he completed 11 SCA (Shot-Creating Actions), six dribbles attempted, as many key passes and five crosses.

In his next seven matches he failed to better any of those tallies, with just eight SCA, three dribbles attempted, four key passes and five crosses.

His only improvement was in terms of shots, where he managed four post-Brentford — one more than his tally on matchday 1.

It’s hard to blame any tactical changes for the utter disappearance of his productivity, as Arsenal have stuck with a lopsided 2-3-5 system in possession that sees the right-back stay far more conservative than the left-back, who pushes all the way forward and makes overlapping runs.

If anything, the addition of Takehiro Tomiyasu on the right of their defence further solidified Arsenal, which should ideally free up the left-back to have a greater attacking involvement.

Statistically, Tavares’ attacking performance against Aston Villa was a big improvement on what Tierney managed in the early stages of this season, as this comparison illustrates:

The main thing that the Portuguese full-back seemed to be doing better right from the get-go was making overlapping runs and timing them properly.

Emile Smith Rowe (the left-sided attacker on the night) is very much a player who liked to cut inside from the left wing with the ball thanks to his right-footedness, so the moment he picked up the ball out wide, Tavares saw the cue to get on his motorbike.

Quite often, he even interchanged with the Englishman to start further ahead.

Tierney has played three matches this season with Smith Rowe occupying the left wing spot ahead of him, but he never seemed to develop such a clear understanding with the English youth international as Tavares showed in this match.

His rapid pace proved to be quite useful in transition too. That led to his only key pass of the match, but it was also clearly the best chance created in the game.

When Arsenal won the ball back, Tavares was well behind Smith Rowe at the edge of his own box…

…but by the time he reached the halfway line, he was more concerned with staying onside, such was the speed with which he covered all the ground.

The pass was, as ever, pinpoint, and the left-back had the simple job of squaring the ball to Bukayo Saka, who somehow failed to beat a scrambling goalkeeper with absolutely no opponents around him, robbing Tavares of what would have been a richly deserved assist.

Another advantage that the Portuguese under-21 international has over his Scottish teammate is his relative two-footedness, which allows him to cut inside from the left wing and shoot, quite like a left winger.

He made that sort of move on two occasions in the match, with the one we will be looking at proving to be quite valuable as his deflected shot led to the opening goal via a corner kick.

Once again, it all started with Smith Rowe feeding Tavares.

This time, though, instead of hitting the byline and crossing, the left-back chopped inside.

Now, even if the subsequent shot proved to be utterly useless, the preceding move alone would have a net positive effect on the match, as it would plant a seed of doubt in the defender’s mind as to whether Tavares would cut inside again the next time he ran down the left with the ball or try to cross.

This would give the Arsenal man the upper hand in this sort of one-on-one situation.

Tavares’ passing was also a lot more positive and direct in contrast to Tierney, whose progressive passing numbers dropped from per 90 averages of 3.84 and 3.64 in his last two seasons to just 2.76 this campaign.

The ex-Benfica man also played a crucial part in the third goal, as he played a precise pass into Pierre-Emerick Aubameyang, whose first-touch flick-on sent Smith Rowe through down the left, after which the Englishman found the near corner with his finish.

There can be no doubts over Tierney’s quality and status as Arsenal’s first-choice left-back – his defensive strengths, in particular, make him a more well-rounded choice than Tavares.

However, the Portuguese youth international has undoubtedly made a case for himself as a better option in matches where the Gunners need their full-backs for more offensive purposes, as was the case in this match where Villa’s 3-4-1-2 did not pose much of a threat down the wings.

His speed, decision-making, and greater versatility in the final third, along with a great connection with Smith Rowe, clearly make him a strong attacking option, especially in the context of Arsenal’s lopsided system as previously discussed.

Irrespective of who plays when, Arsenal certainly have their left-back position in safe hands until the distant future, as the 24-year-old Tierney and 21-year-old Tavares provide great quality and varying strengths in the role.

Stats courtesy StatsBomb via Fbref and Opta via WhoScored.

Who will be Newcastle United’s next manager?
Premier League – October 24, 2021 – Preview & Predictions