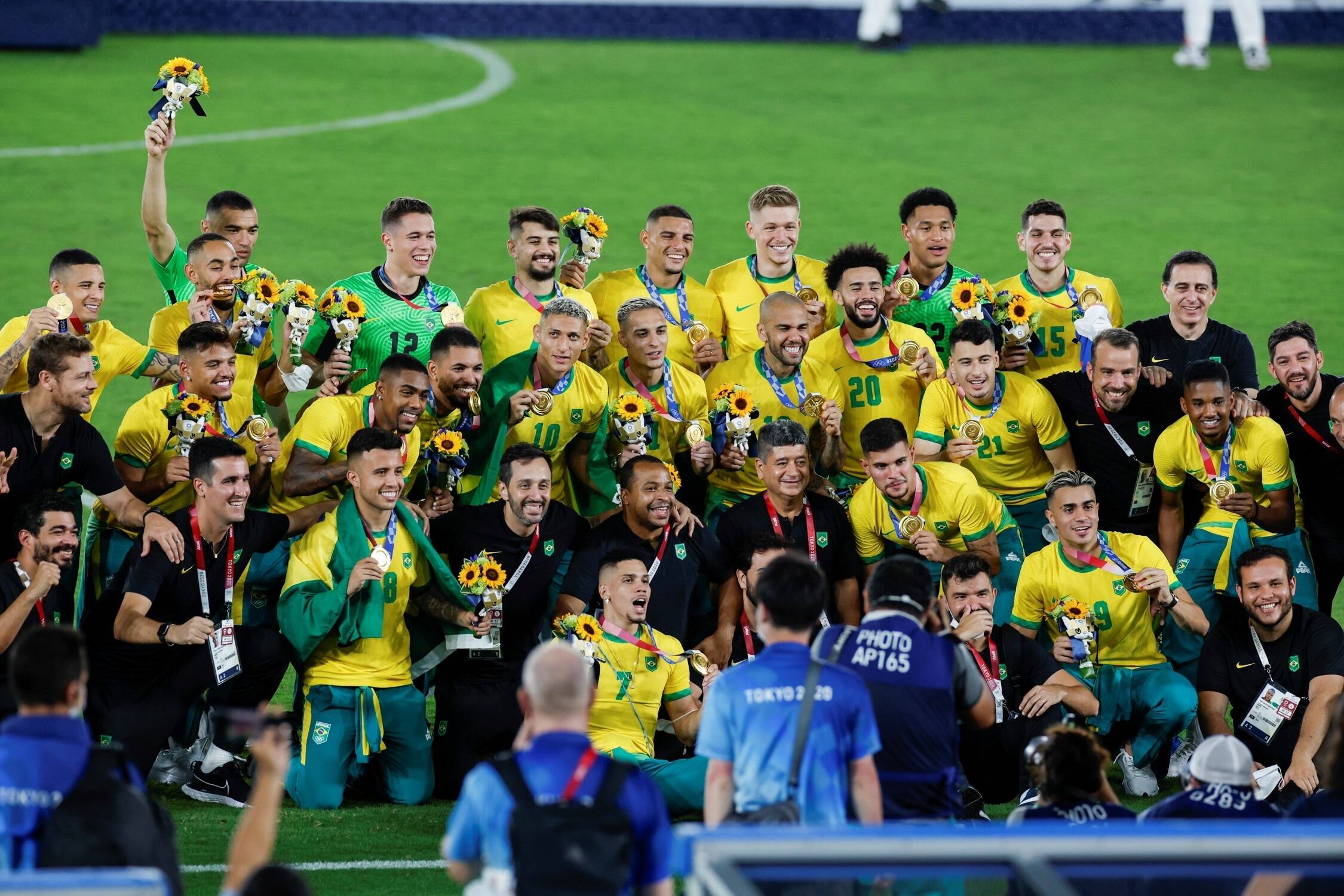 Malcom’s winner in the second half of extra-time sealed a dramatic victory against Spain, as Brazil defended their Olympic title in Yokohama at the Tokyo 2020 Games.

Brazil’s men’s football team had never won an Olympic gold medal before Rio 2016 but have now triumphed in back-to-back Games.

It was a cagey start to the affair as both sides attempted to get a foothold in the game, with the first chance falling to Spain with 17 minutes on the clock.

Marco Asensio sent a teasing ball towards the back post, and Mikel Oyarzabal’s cutback was cleared by Diego Carlos with Dani Olmo lurking.

The Brazilian centre-back was forced to clear his interception off his own line after his initial block had looped over Olmo and was heading towards goal.

Eight minutes later, and it was Brazil’s turn to create their first opportunity, as Guilherme Arana’s clever ball sent Richarlison in down the left-hand side, but the 24-year-old fired his first-time effort into the side netting.

The Everton forward was presented with the chance to put his side ahead in the 37th minute, as VAR intervened to award a penalty as Spanish goalkeeper Unai Simon was judged to have fouled Matheus Cunha after flying off his line to claim the ball.

However, Richarlison’s effort was wild as he ballooned his spot-kick over the bar to keep the scoreline goalless.

Cunha made amends for his compatriot’s miss on the stroke of half-time as he fired Brazil into the lead.

Captain Dani Alves showed brilliant determination to keep the ball alive after a deep ball into the box, and the 38-year-old’s hooked cross into the penalty area was expertly brought down by Cunha as he calmly slotted home with Simon rooted to the spot.

The Copa America finalists really should have been two goals to the good seven minutes into the second half, as Richarlison smartly sat defender Oscar Gil down before seeing his effort deflected onto the underside of the crossbar by Simon.

And the Brazilian’s were made to pay for their miss as Spain equalised moments later.

Carlos Soler found space down the left and sent a ball towards the back stick, with Oyarzabal sending a sweet first-time effort into the roof of the net past the helpless Aderbar Santos.

Spain kicked on after their equaliser and looked the more likely to clinch the game’s winner in normal time.

Five minutes from the full-time whistle and Spain almost clinched victory in the most bizarre circumstances, as Gil’s mishit cross caught Santos out with the ball crashing against the bar after looking destined to head over for a goal kick.

Moments later and Spain once more hit the woodwork, but there was no element of fortune this time around.

Tottenham’s new boy Bryan Gil picked the ball up from just outside the area, shifting it onto his left foot, before thundering a fierce effort at goal which cannoned off the bar.

Three minutes into the second half of extra time and Brazil broke with pace from a Spain corner.

Antony collected the ball before switching play brilliantly to substitute Malcom, who showed his blistering pace and strength to brush off Juan Vallejo and work his way into the box.

The former Barcelona man kept his composure as he tucked the ball under the despairing Simon and was mobbed by his teammates seconds later.

Spain pressed for an equaliser, but Brazil stood strong and celebrated wildly at the final whistle as they claimed their second successive gold medal in men’s Olympic football.

It was a landmark victory for skipper Alves, with the most decorated footballer in history adding another medal to his haul of 43 trophies.

Read also: Lionel Messi – What next for Barcelona’s departing legend?